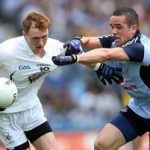 In a game that most within the Kildare ranks will want to forget as quickly as possible there was one positive in the display of Paul Cribbin.

Not everything the Johnstownbridge man tried came off but his drive and determination as well as the refusal to drop his head even when the game was long gone marked him down as somebody who will enjoy far better days in a Kildare jersey in the future.

Of his 24 possessions, Cribbin gave the ball away four times although it could be argued that perhaps he was guilty of carrying the ball into contact on occasion but on a day when Kildare looked short of leaders, a player who only turned 21 in the week leading into the game stepped forward.

It wasn’t all good though and one of the occasions in which Cribbin gave the ball away summed up one of the key differences between Kildare and Dublin. In the 22nd minute, he brilliantly read Stephen Cluxton’s intention to play a short kick out to Paul Flynn and made the interception just outside the Dublin 45. It left Kildare in possession with a 5v5 situation inside the Dublin 45. Cribbin lost his composure and instead of picking a proper pass or driving at the Dublin defence, he skied the ball up in the air and possession was eventually lost without a chance of a shot.

Elsewhere in the team, 19-year-old David Hyland was thrown in at the deep end at full-back and must have wondered what he had been let in for. On the face of it, with 2-3 scored by the Dublin full-forward line who started and Eoghan O’Gara adding 1-2 in the second half you might presume that there were problems in the full-back line but in Hyland’s defence, the bigger problems were much further out the field. Dublin’s first goal summed up much of his problems as he was left with the choice to stick or twist as Diarmuid Connolly bore down on goal. It was a no-win situation.

The Athy man defended tenaciously throughout with the highlight being a full length diving block on Paul Mannion in the 44th minute when it looked like the Dublin man had got away from him. He also saved a certain goal with a sliding block on the same player in the 16th minute. Unfortunately for Hyland and Kildare, both those blocks led to Stephen Cluxton scoring from the 45. One blot on his copybook was in the 15th minute he tried to win the ball in front of Mannion but the Dublin forward won the ball, slipped it inside to Ciaran Kilkenny who converted to put Dublin ahead for the first time. It was a lead they never relinquished.