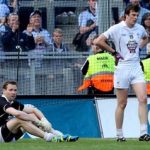 What became a massacre ended with a scoreline that flattered Kildare.

The sad reality of life with the big boys for the Lilies was that they left Croke Park on the back of a 16-point defeat that could have been far worse. For the second time this year they were steamrolled by Dublin, flattened for all the world to see.

By now it’s long forgotten that Kildare began the day with the brightest of starts because the rest of the game turned into one of the biggest routs of the football championship. In what was an epic display by Dublin they inflicted a defeat so brutal that it will enter the history books. Two centuries and one millennium have passed since a margin this big separated these great rivals.

So by the end the details were insignificant. The date and scoreline entered the records as Dublin dismantled Kildare in a way has never been seen before in the championship. With a cold and calculated approach of their superb running game, Dublin ran their opposition ragged, leaving them desperate for the final whistle long before the finish.

And yet after eight minutes, Kildare were a goal to the good, five points clear and leading the charge in a frenzied game of football that briefly threatened to rival the epic 2009 Leinster final meeting between these sides. It was all a grand illusion. It took Dublin five minutes to recover their five-point deficit and just like that they were gone, playing football in a different realm.

As the first half progressed, Kildare were bamboozled by the avalanche of Dublin attacks. Level after 15 minutes, 1-3 apiece, Dublin scored three points in three minutes, bang, bang, bang, Two of them were 45s converted by Stephen Cluxton after Kildare had managed to deny Dublin two more goals.

The first goal had been unavoidable. After winning a good turnover inside their own 45, Eamonn Callaghan kicked the ball back to Dublin, having vacated his half-back line to launch at attack down the left. When the ball was returned to the Kildare 45, Diarmuid Connolly was all alone, skipping through unmarked to set up Paul Mannion for the easiest of goals as the corner-forward finished a three-on-one move in front of Shane Connolly.

It was a depressing way for Kildare to cede their advantage. An intense effort at the start yielded an invaluable goal from Paddy Brophy when he slipped inside Johnny Cooper and confidently fired the ball low into the net. He clipped over a neat point one minute later to complete a dream start but Dublin got their goal on the very next play while four minutes earlier, James McCarthy had flashed a shot off the butt of an upright.

It was frantic and it was frightening for Kildare. By the 13th minute, Dublin were level and six minutes later they were three clear and cruising. In the space of 11 minutes Dublin had scored 1-6 and caused an eight-point swing.

What was amazing then was that it took until first half injury-time for Dublin to come again. Somehow Kildare stemmed the tide after Ciaran Kilkenny scored his second point to make it 1-6 to 1-3 and by the end of 35 electric minutes in Croke Park, the Lilies had actually reduced the deficit.

A John Doyle free and a second Eoghan O’Flaherty point from play halted Dublin’s gallop but it was brief respite. Before the men in white could see out two minutes of injury time, Dublin swept up the field once more. With devastating simplicity, the ball was played through the hands to Bernard Brogan on the edge of the square and he thumped the ball past Shane Connolly.

At 2-7 to 1-5 the scoreboard couldn’t tell you that there was no way back for Kildare.

It actually got slightly better before it got worse. Paul Cribbin opened the second half scoring with a point but it was another false dawn. Kildare didn’t score again in the next 17 minutes while Dublin strung together a brilliant passage of scores that ended the contest by the 54th minute. This time it took the Dubs 15 minutes to score 1-5.

Diarmuid Connolly fired home the third of their goals, the shot again coming at the end of a blistering running attack, and while Kildare managed three points in the final 16 minutes, there was no mercy for them at any stage. A fourth Dublin goal from sub Eoghan O’Gara, three minutes into injury-time, completed their rout on a day when another six good goal chances went a-begging for the winners.

Kildare left Croke Park wondering what had hit them.