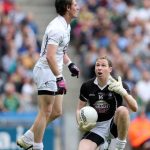 There was a multitude of reasons that Kildare supporters could pinpoint as to why they had suffered the ignominy of a proper hammering at the hands of Dublin as they made their way back down the N7 on Sunday evening. Why play with such an open defence? Why disrupt the partnership of the two Flynn’s in midfield? Why persist with so many high, hopeful balls into the full-forward line? But for Kieran McGeeney, turnovers was key to the game.

He labelled Kildare’s passing ‘sloppy’ and they were punished mercilessly by a ruthless Dublin team.

“Four or five of our key players didn’t even turn up and were guilty of giving away four possessions leading to four scores,” said McGeeney.

One of the game’s key moments came less than two minutes after Paddy Brophy had given Kildare the kind of start they had dreamt of by firing past Stephen Cluxton in front of Hill 16.

Having built a 1-2 to no score lead, Kildare really needed to keep possession and ensure that they didn’t give Dublin an easy score. There shouldn’t have been any danger when Eamonn Callaghan was on the ball in front of the Hogan Stand just inside the Dublin half but instead of playing a short hand pass, the experienced captain of the team elected to switch the play towards Daniel Flynn. It was a 50/50 pass at best and Dublin were able to turn the ball over. Once the ball was played to Diarmuid Connolly, his marker Mick Foley was miles out of position and the wing forward was allowed the freedom of Croke Park to run at the Kildare defence before setting up Paul Mannion for a goal.

Much of the focus of Dublin’s second goal lay on whether Johnny Doyle was hard done by when a free was given against him for a shoulder charge on Johnny Cooper but McGeeney’s mind was more likely preoccupied by the turnover inside the Dublin 45 when Paddy Brophy’s handpass wasn’t picked up by Paul Cribbin and Dublin had another chance to attack.

There were also points conceded when Daniel Flynn and Emmet Bolton were slow to pick ball off the ground.

In the 28th minute, when Sean Hurley was dispossessed by Cian O’Sullivan inside the Dublin 45, five passes and a driving Jack McCaffrey run later, Kildare were only saved by a fine block by Connolly from Brogan’s shot, although McCaffrey was entitled to have a word in the ear of his more experienced team mate as a simple hand pass would have left him with an empty net.

The third Dublin goal came when Peter Kelly and Mick Foley were caught bursting forward but once the turnover occurred inside the Dublin 45, Kevin McManamon had acres to run into. Even after the turnover, Eamonn Callaghan was in a good position to make a tackle and hold up McManamon but the substitute just brushed past the Kildare skipper.

It’s perhaps unrealistic to expect a team not to concede possession at all during a game and there is certainly a case to be made for Kildare tightening things up at the back but could McGeeney really plan for his team to make 16 turnovers inside the Dublin 45 during the game? Those sort of turnovers were always going to cause trouble against a team who can attack with such pace and who time their runs off team mates shoulders so well.

It wasn’t just turnovers that were a problem though as McGeeney noted when insisting that merely getting men behind the ball wouldn’t have solved all Kildare’s problems.

“You’re always going to have numbers back anyway because they attack in numbers there. There is never a problem with the numbers there, it is the contact,” he said.

For a side who were noted for their physical stature just a few short years ago, much of Kildare’s tackling left a lot to desired. Michael Daragh MacAuley went past Daniel Flynn like he wasn’t there in the 14th minute and would have been in for a certain goal only for a last ditch tackle by Emmet Bolton. Eamonn Callaghan was also left floundering by Kevin McManamon on the way to Dublin scoring their third goal.

Dublin broke the Kildare tackle time and again while Kildare struggled to do the same to Dublin, instead being forced backwards into pointless lateral passing.

There’s no doubt that Dublin were better at physical contact than Kildare on Sunday and while the younger players will obviously get stronger as they get older, there has to be questions raised as to how Dublin can be so much stronger and quicker than Kildare.