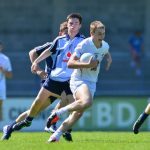 IF a week is a long time in politics then a fortnight can feel like a lifetime in Gaelic football.

We have been here before but somehow the return to the familiar breeding ground of the Qualifiers feels different this year. Defeat is never easy to accept and the 2011 loss to Dublin was particularly cruel but what transpired in Croke Park last Sunday week was a new low for this county. It is one thing to slip so far that you become irrelevant but to reach for the top and miss by so much is a really sickening feeling.

While this year’s Kildare side has been infused with youth, the core of the team has been on the road as long as Kieran McGeeney has been in charge. Having clocked up so much mileage on and off the training pitch in the last six years, now is not the time to be crash-tested.

A home qualifier against Louth represents a huge opportunity for Kildare but it will have taken a monumental mental leap to have overcome the Dublin defeat.

There is a lot of mileage on the clock among the majority of that squad and there comes a time when you just can’t raise it anymore. Kildare’s experienced players have played a lot of football in the last six seasons. They looked anything but fresh against Dublin so just getting right physically will have been a challenge in the last fortnight.

Of course Kildare aren’t as bad as the scoreline made them look against Dublin and until the year is out we won’t quite know how good this Dublin side are. If they go on to fillet Meath in the same manner that they ripped us apart then we might feel a little better but not much. I refuse to believe that Dublin have jumped that far ahead of us in such a short space of time. To my mind, it is a combination of Kildare going backwards and Dublin going forward that has led to two chastening defeats in 2013.

Whatever about the change in personnel, there seems no clear purpose in how we now play. Do our players have a clear understanding of how they’re supposed to play? Against the weaker teams we get away with our open style of football because we generally over-power them. We became the team that would score 18 points if you scored 17 but against the very best teams, that approach has always failed and in the worst case scenario it has led to us receiving three major hammerings inside the last 12 months.

At times it feels like we’re playing an older game of football, a version that is fine to watch but ineffective against the ultra-modern defensive and attacking systems employed by the very elite. It was never about the result against Dublin but the manner in which we were going to play. What we needed was evidence of a style and a system that Kildare could wear with comfort. Instead we witnessed a team that was lacking in direction and completely unsure about what to do when it was in trouble. That doesn’t bode well for a future tilt at titles under McGeeney.

The result is all important this weekend so it is hard to see how we will be able to change tact radically. If our players perform then we should be good enough to beat Louth but if they come equipped with a disciplined defence and a solid gameplan, they could well cause an upset.

Oh what a tonic to witness the county minors progress to a Leinster final. Like mushrooms, this team seem to have come up overnight and with so many of the big guns gone from the race, there could be more than just a Leinster title to play for this year.

With a strong spine and some really talented forwards, this minor side will be very hard to beat and all the more so in Croke Park where the likes of Chris Healy and Luke Flynn will surely prosper.

It was refreshing to see a Kildare side play with such abandon. Neither the opposition nor the venue seemed to affect us as we tore into Dublin from the beginning and never allowed them a chance to draw breath. What was most impressive about the minor performance was how we responded after conceding a goal against the run of play in the first half. If we had a fragile side they would have struggled to get going again but our response was emphatic and by the end of the first half we were almost out of sight.

Again the performance after half-time was impressive. With one foot in the final, Kildare refused to take their foot off the accelerator and drove at Dublin again. It was the

Hallmark of a good side and I wouldn’t be surprised if they are crowned Leinster champions on Sunday.

A good goalkeeper and a reliable freetaker will be vital assets at Croke Park and Kildare have one of the best young keepers I’ve ever seen in Sean Dempsey. Neil Flynn, Wayne Fitzpatrick and Jamie Flynn are all comfortable from dead balls which bodes well for Sunday.

Filed under: All-Ireland SFC Qualifiers, Dublin, Football, GAA, Kildare, Leinster MFC, Louth
By The Supporter
Email Journalist
Contact Newsdesk: 045 432147
"
Having clocked up so much mileage on and off the training pitch in the last six years, now is not the time to be crash-tested"