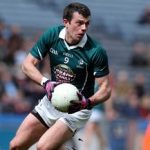 Kildare have made one change to their starting 15 for Saturday’s crucial All-Ireland SFC qualifier against Louth.

St Laurence’s Padraig O’Neill replaces Sean Hurley at midfield as Kieran McGeeney keeps faith with the majority of the side that lost to Dublin in the Leinster SFC.  Shane McCoy, John O’Brien and Ray Finnegan have been drafted into the Louth team.

McCoy takes over in goal from Neil Gallagher, who is suspended after receiving a red card in the closing stages of the Antrim win, while O’Brien – who returns from suspension – and Finnegan are both named in the half back line. Conor McGuinness and Brian Donnelly are the other two players to make way.

Adrian Reid moves to the half forward line with Brian White now partnering Paddy Keenan in midfield. Colm Rafferty will wear the number 11 jersey with Ciaran Byrne at number 10 and Colm Judge switching to the left corner.