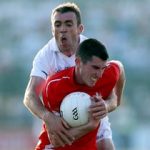 Kildare’s John Doyle tackles John Bingham of Louth: “We felt we let ourselves down after the Dublin game”
Photo: INPHO/Donall Farmer

JUST as he seems to know instinctively what to do on a football field, Kildare’s young supporters follow their senses and flock to John Doyle after football games.

As Doyle left the scene of another famous display in white, children gathered around him as if he was Santa Claus making a summer appearance. At one stage he was almost knocked over by one eager embrace but Doyle hardly batted an eyelid as he put words on a battling Kildare performance.

“All we wanted was to fall over the line by a point and get back on the road after the disappointment of the Dublin game,” he said. “In fairness Louth threw everything at us and for stages there it looked like they were going to pull away but the lads stuck at it. We wanted to make sure that we left everything out on the field. We felt we let ourselves down and the supporters down after the Dublin game and that was something very much in our minds.”

If Kildare were playing for redemption, as well the victory, then it perhaps it was understandable that they played like they were carrying a heavy burden.

“Again we gave away some silly ball, we gave away 18 balls in the first half and that was killing us. That killed us against Dublin as well,” said Doyle, describing the symptoms but struggling to put his finger on the causes of Kildare’s malaise.

“Maybe anxiety (is causing it), maybe a little bit of inexperience. Maybe we just need a little bit of composure but there was a bit of an edge there coming into the game. It was a mental thing after the Dublin game that lads didn’t perform and I thought if we could get a performance we’d be there or thereabouts.”

It wasn’t until Doyle landed a huge free in the 59th minute that Kildare began to take control of the scoreboard but Kildare’s top scorer didn’t sense it was a significant moment in the game.

“At the time you don’t think about it. If you don’t go for it, you’re never going to know. You have to go for them,” he said of the free that brought Kildare level at 0-15 each and started a run of 1-5 for the home side. Now Kildare have another big game to prepare for this weekend, with the management facing another tough team selection.

“There were a lot of lads very disappointed when the team was named,” Doyle revealed, referring to the first 15 selected against Louth. “It’s a man’s game, you have to leave emotion at the gate. The only place you can make it right, it’s when you cross the white line.”