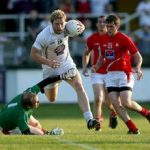 HAVING been dropped from the starting 15 against Dublin, Tomas O’Connor did his talking on the pitch as he scored a crucial goal against Louth on Saturday night.

O’Connor’s 66th minute strike was vital for Kildare as they won a tricky round two Qualifier at Newbridge.

“I was disappointed to not get a run out against Dublin but I just put my head down again,” said O’Connor, who was introduced as a sub in the 31st minute. “I was lucky to get on today and I took my chance. I did as much as I could for the team,” he said.

The goal was the second of three decent goal chances for O’Connor.

“At least one came off,” he said after a close call against Aidan O’Rourke’s Louth. “It was always going to be very hard to break away from Louth, in fairness, they came down here and stuck with us for the whole game. We were lucky to get a break on them and we took our chance when it was there.”

The win means that Kildare are back in action against Tyrone at Newbridge this weekend.

“We’ve done it for the last few years, it’s week after week and it really does keep you focused,” said O’Connor of the Qualifiers’ demanding schedule. “You do your Tuesday and Thursday in training and then look forward to the game at the end of the week.”

O’Connor was full of praise for the home support on Saturday night, as a packed St Conleth’s Park roared Kildare home.

“The Kildare fans came out in their numbers and really got behind us. It was a brilliant atmosphere. After the Dublin game I suppose it was hard for them to come out and support us again but they really did come out and gave it everything today and it really helped us get the win,” he said.

“It was good to put the Dublin game behind us and get the victory,” added the 26-year-old Clane man.

A firm favourite with the fans, O’Connor got a huge reception from the St Conleth’s Park faithful when a huge roar greeted the full forward’s 31st minute introduction as a replacement for Paul Cribbin.

That was made to sound like light applause compared with the noise that greeted O’Connor’s crucial 65th minute goal. It was just his second goal in his 23rd championship appearance but there was probably no better time to score.