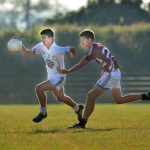 Kildare’s latest crop of young footballers were in action at

KILDARE staged a remarkable second half comeback to book their place in the blitz final.

With a possible final to be played after this game, the Kildare management gave their full squad a run out and in the first half they struggled to live with a powerful Westmeath side. Full-forward Ciaran Doyle caused Kildare a number of problems. The young Lilies started brightly and a goal and a point from Rheban pair Conor Germaine and Dean Carthy put them ahead. It was backs to the wall in the remainder of the half following that start and Westmeath scored 2-8 without reply.

Half-time brought a number of changes on both sides with Kildare introducing 13 new faces. The change in the game was instantaneous. The midfield pair of Rory Feely and Conor Hartley got a grip while at centre-back Ethan O’Donoghue showed his wide range of skills

Within five minutes, Feely had a chance from a penalty to get Kildare up and running once Peter Howard had been fouled. Just like his older brother, Kevin, he kept his composure as he hit the back of the net. Points from Aaron Murphy and Gavin Burke followed.

Sarsfields’ Conor Hartley then got the first of his brace of goals when he scored on his second attempt having seen his first shot saved. Kildare went back in front for the first time with five minutes to go when powerful full-forward Peter Howard scored from a yard out, following good approach play by David McAtamney and Stefan Lawler.

Once Kildare got their noses in front, they were never likely to relinquish the lead they scored points through Murphy, Feely, Niall O’Neill (2). Hartley round the game off with a goal in the final minute to send Kildare into the final.

A blistering start set Kildare up for victory over the Dublin under-16s in the Leinster blitz final.

Just as in the semi-final, Kildare looked to the likes of Ethan O’Donoghue, Conor Hartley, Rory Feely and Aaron Murphy and there was much to admire about in the performance of Brendan Hackett’s young team.

Dublin, managed by Collie Moran and Darren Homan, were hit by two goals inside the opening five minutes. Stefan Lawler set Murphy up for the opening three-pointer and then the Dublin defence was marked absent as Conor Hartley waltzed through to bag a second.

There was a swagger to Kildare’s play as they confidently moved the ball around the pitch and they were full value for their 2-1 to 0-1 lead after ten minutes.

Dublin regained their composure following their slow start and with the help of a Shane Howard goal and three successive points they were back level by the 17th minute. A left-footed free by O’Donoghue put Kildare back in front and they could have had another goal seconds later. Feely rose superbly in midfield to win the ball and sent Peter Howard through on goal but his shot was narrowly wide of the upright.

Sean Caffrey equalised for the Dubs on the stroke of half-time and there was plenty for both managers to talk about at the break. After Dublin moved ahead early in the second half, Kildare came back with points from Howard, Stephen McGlynn and Feely. There was a real championship feel to the game now as Dublin pushed hard to get back into the game and two points on the bounce certainly helped their cause.

With six minutes to play and the sides level, it was Kildare who were able to push forward to take the win. O’Donoghue and Feely combined to set up Murphy and then Hartley sent the ball in towards Murphy for him to finish.

In the closing stages, there was an incident that showed up how these young Kildare players are learning to play at the top level. They were pushing forward, looking for a score to kill off the game but looked like they could get caught out when Murphy’s wayward pass was intercepted and suddenly Dublin poured forward.

Kildare were caught with too many men committed forward but before Dublin could break forward, Shea Ryan dragged the Dublin man on the ball to the ground and was rightfully booked. It wasn’t something that the purists might appreciate and certainly isn’t in the Kildare coaching manual but it showed good game intelligence and showed that this young Kildare team know how to see out a game once they had their noses in front.