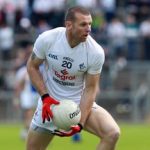 AFTER 14 years and 127 league and championship games Ronan Sweeney has retired from inter-county football.

The Moorefield man served under four Kildare managers and won a Leinster title in his first full year on the panel in 2000 but a back injury meant that he had to settle for a bit-part role this season. A proud Kildare man, Sweeney admitted it was big wrench to leave the panel.

“It’s sad, I had it in my mind but it’s difficult to actually say the words. After a long time, 14 years, it’s all you know, all my adult life has been just about training and trying to perform and win matches. It was an enjoyable time though and it was great that I was able to do it,” he said.

Sweeney made his first appearance in a Kildare jersey in a league game in St Conleth’s Park against Derry as a 34th minute replacement for Mark Millham. Sweeney was to be a regular feature of Kildare teams over the next decade and beyond.

He made his championship debut against Louth in the summer of 2000, in the same game that a certain John Doyle made his first championship start, and he went on to start both the drawn Leinster final and the victorious replay against Dublin that year. He was virtually an ever-present for the remainder of Micko’s time in charge and remained that way through Padraig Nolan and John Crofton’s time and for the majority of Kieran McGeeney’s tenure, which to him has been the highlight.

“It’s hard to pick anything out, obviously winning the Leinster in 2000 was massive but I was fairly young at the time and I didn’t really take it all in and understand what was happening really. I was kind of thrown into it a little bit at that stage. The time under Kieran was probably the most enjoyable time that I remember, especially ’09 and ’10, the long runs we had in the championship and getting so close to the All-Ireland final,” said Sweeney.

He finished with a scoring record of 5-31 in the league and 5-31 in the championship but injuries meant it was hard for him to make a mark this year and the league game against Tyrone in Newbridge was his final appearance.

With two children, Cameron and Summer, and wife Jackie to look after, as well as his club ambitions with Moorefield, Sweeney won’t be stuck for something to do.

“I don’t know if I’ll miss the winter’s training to be honest, I’d rather be sat in by the fire! I’ll still be involved with the club and I’ll take that very seriously. That will take up a lot of my time because I feel I owe the club something because they have put up with me being away from them for so many years. I’m looking forward to getting stuck in and giving everything I can to try win another championship. I’m looking forward as well to spending more time with my daughter, Summer, and my wife, Jackie,” he said.