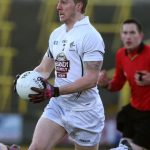 Coill Dubh hurler and Allenwood footballer Johnny Byrne joined a very small list of players who have played senior championship for Kildare in hurling and football when Kieran McGeeney introduced him as a substitute in the recent Round 2 qualifier in Newbridge. In a memorable year, Byrne also won Leinster under 21 medals in hurling and football.

It was always on my mind to come back to the hurling. I would never drop the hurling because obviously Gaelic football and hurling are my favourite sports. I always wanted to go back and play it. The good thing about Kieran (McGeeney) this year was that you were able to talk to him and he gave me the opportunity to not only train with the seniors but also to go to one or two training sessions with the hurling. He was reasonable with the way he allowed me to play the hurling as well. As well with the hurling, the managers were understanding that I was involved with the football and they didn’t mind too much because they knew I was getting tough training and that I was fit.

I played with the senior hurlers in 2011 and then the following year I went to Australia for a year but when I was away I realised that I missed the Gaelic football and I knew it was my last year at under-21 so I said I’d come home and give it a good lash with the football. That’s what I did and things just started to go up for me from there with Kieran giving me an opportunity with the seniors. I obviously took it and I wasn’t going to turn it down because you don’t know how many opportunities you are going to get.

It was a bit of a surprise to be called in with the seniors but I knew that Kieran was managing the under-21s as well and I knew that I kept impressing that I would get my chance. I was lucky enough to get the chance and I kept training hard and kept pushing on. It was great to have Kieran on board because he is a well respected man and for me to come up to senior and have somebody like him as manager was a great motivation for me.

Byrne on Leinster glory this year

To be playing for your county at any level is just brilliant and then to come out with a trophy at the end of it is like accomplishing all the goals you set out to do. You’re not coming out with your head down, you’re coming out with your head up and this year the trophies just kept coming. Anything we competed in we competed well. It’s just a great feeling, not just the football which means a whole lot to me but the hurling as well. I’ve played senior inter county football and senior intercounty hurling not too, that’s where you want to be as a young lad growing up.

His future as a dual player

I would like to play as a dual player in both hurling and football because it would be a tough decision if I had to choose between them and I don’t know what it would come down to. If I had a manager like Kieran this year who was understanding, and the same with the under-21 hurling managers, I’d play as much as I could.

When I stopped the hurling for a while, I was coming back to hurling training and I felt off the pace in terms of the technical skills but it does come back to you. When I was away in Australia I had my hurls over there with me so I never really lost it but I was gone back a bit. All it took though was to get out to a wall with a ball for a couple of hours and then after a week it comes back to you. The hunger is there for the hurling because I haven’t played in so long. When you actually get back in and play you just want to keep driving on. It’s a great feeling to go back playing what you left.

I’m working a full time job now Monday to Friday, nine to five, and the hours really suit me. I might even have time to get something to eat at home before I go training and then at training they give you more food.

There is always something that you have to do because if you are training that much recovery is a big thing too. If you want to get the best out of your performance you have to recover and if you don’t recover right you’re going to be sore, you’re going to be carrying knocks and the knocks are just going to keep on coming. You’re better off to do your recovery and to not do too much either and that goes back to having an understanding manager. If I’ve trained on Wednesday with the football and then a Thursday with the hurling they will understand and tell you to step out of some of the tougher things they are doing.

We do pool sessions after a game and you can do all your recovery and stretches in the pool. You really do look after yourself when you are with the county, they give you these facilities to actually do proper recovery sessions. There are proper dieticians to look after you and give you advice on what you should eat.

At that level you just want to get the upper edge on anybody who comes near you so they are obviously going to be doing it so you want to do it as well. You just have to get in as much water and any healthy foods to give you that burst at the end of it. A bit of pasta is the main thing I’d eat before a game and an energy bar, NutraGrain bars, I find them great.

Remainder of the summer

I have a lot of trophies already this year but my year is not over yet. We have the under 21’s hurling, there is the All-Ireland to play for there and we are not going to stand for anything other than winning it. With Coill Dubh, we have a great chance to win the county final and it would be great to win it this year with the new Carew Cup. It means a lot to the club and we are going to take very serious this year.

*In conversation with Ger McNally