Byrne on top of the world 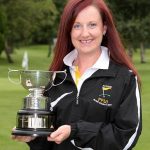 Even for a serial title winner like Chrissie Byrne, July 2013 will go down as a very special month in her career.

In the space of three weeks she became a Leinster, Irish and World champion as well as cementing her number 1 Irish ranking for the fourth successive year. It was an amazing spell of dominance for the St Brigid’s player and even she found it hard to believe.

“It’s the stuff dreams are made of. To follow winning the world championship by winning a Leinster and then a national title in the following two weeks is a dream come true,” she said.

The Kilcullen girl began her winning spree by retaining the world title she had won in France in 2009 by beating the world’s best in Tambre, Spain. Although the sweltering heat made things difficult for Byrne, she was too hot for anybody else in the field to handle and finished a single shot ahead of Esther de Shiffart from Holland.

Byrne spoke at the time of her nerves as she putted to become a world champion but just seven days later she could relax a little more as she won a Leinster title by six shots at the rather less glamorous surroundings of Athgarvan.

The Irish title was then won the following week by a massive 12 shots.

“You only dream of these things,” said Byrne. “I woke up the day after winning the national title wondering is this all real but it is, I’m really delighted.”

“I had a good lead after 36 holes in the Irish championship and I was six ahead of my nearest rival. I played with her in the final round and I kind of went into cruise control and in the end I won by 12 which was great. It meant I wasn’t as nervous playing the 18th as I was when I was in the world championships a couple of weeks before that,” she said.

Byrne believes that the confidence gained from winning the world title set up her up nicely for her ensuing victories.

“Winning the world strokeplay was a great boost for my confidence coming into the Irish championships. A win like that is always going to boost your confidence and playing any sport with confidence makes things a little bit easier. It’s was a great three weeks, I was really on a high from it,” she said.

While it helped her confidence, it also put a big target mark on her back as she became the player that everybody wanted to beat in the Leinster and national championships but Byrne just could not be caught.

“Not over the past two weeks anyway which has been great,” she laughed.

Byrne’s attentions will now turn to team competitions for the remainder of the season.

“They were the last of the individual competitions this year really, the team events start now, the intercounty is coming up in August and September and hopefully I will be able to keep that form up going into the intercounty and next year as well,” she said.

The glut of trophies is just desserts for all the hours of practise put in by Byrne and it’s her dedication that has carried her this far.

“Absolutely. I’ve put in a lot of practise in the first six months of the year because all the competitions are on top of each other really in May, June and July so if you are out of form in those three months your year is practically over but I’ve done well and I am happy with how things have turned out so far,” she said.

Byrne though has found title to celebrate her victories in style.

“The Spout in Kilcullen have had good business for the last few weeks. They actually sponsored me to go over to the world strokeplay in Spain so we’ve been giving Tommy in there plenty of business over the last few weeks with the celebrating and I’m sure there will be more celebrations ahead,” she said.