Injured Spencer vows to ref on 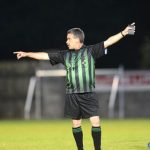 DESPITE breaking three bones in a senior football championship match on Sunday, Kilcullen referee Mick Spencer is hoping to be back in action this week.

The experienced official had to be substituted during Moorefield’s round two victory against Celbridge at St Conleth’s Park when he broke two bones in his arm and one in his wrist.

“The ball was breaking and I was in the middle of three lads, one of them just turned into me and I went down. They were three big lads, Roli Sweeney was in the middle of it and two other big Celbridge players too. I don’t know which of them I caught but down I went anyway and that was it,” said Spencer, who was treated on the pitch by the St John’s Ambulance crew as well as Moorefield physio Derek Curley.

“I have to say thanks to those who looked after me on the pitch, they were a great help,” he said.

Spencer spent the afternoon in Naas General Hospital after leaving St Conleth’s Park but there was a silver lining to this cloud as he enjoyed uninterrupted coverage of the All-Ireland hurling semi final between Cork and Dublin.

“I was in Naas from about 2.20pm and got out around at around 7pm. It was an eventful sort of a day but at least I got to watch the hurling match on the television in the waiting room,” he said.

Spencer was replaced in the middle by one of his linesman, Dennis Lawless, and the game as scheduled with Moorefield running out convincing winners.

An injury like that might sideline a lesser man for a number of weeks but Spencer is made of sterner stuff and already he is thinking of returning to action this weekend.

“I don’t know how long I’ll be out for. I’ve to go back tomorrow and if I can get a lighter cast I’ll go back next week or the week after,” he said.

Filed under: Celbridge, GAA, Kildare SFC, Mick Spencer, Moorefield, referee
By Ger McNally
Email Journalist
Contact Newsdesk: 045 432147
"
The ball was breaking and I was in the middle of three lads, one of them just turned into me"