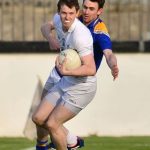 HAVING lost the 2011 All-Ireland junior final to Cork, Kildare won’t lack for motivation in this weekend’s repeat fixture at the Gaelic Grounds in Limerick.

Eadestown full-forward Cian Bolton is grateful for the opportunity to atone for that defeat when Kildare take on the Rebels once again this Saturday at 6pm.

“I was only brought onto the panel shortly before that final so it was kind of a different experience for me but I came on as substitute that day in extra-time. It was a bit surreal but it was devastating when we lost. They were very strong that day and it shows that we can’t take them for granted. We can’t stop playing for periods of matches. We have to hit our form and stay that way for the entire match,” said the 22-year-old Eadestown man.

“There are a few of us from that panel still on the team so that will help. Lads will be nervous, it’s an All-Ireland final, of course lads will be nervous. You need to just remember why you are there and how you got there. We have some good games under our belt but we have to remember that so do Cork and they have the experience of winning one. We know we’ll be up against it but I see no reason why we can’t win it,” said Bolton.

Kildare impressively moved through the Leinster campaign and then convincingly saw off Sligo in the All-Ireland semi-final but there has been a six-week break since that game, not that Bolton sees that as a problem with the club championship giving the players plenty of competitive action.

“We went back to the clubs and they would always keep you going and keep you fit. That’s the way we have done it all year. We’ve been let play with the clubs which is perfect because you come in fresh and ready to go. The championship games we’ve been playing for our clubs are hard games, hard hitting and they are good preparation,” he said.

Even with that gap, it’s unlikely that the players understanding of how each other plays will have diminished too much after the majority of the players, particularly in the forward line, came up through the underage ranks together.

“There’s an understanding there between us all. We’re not afraid to give one another a shout or to roar at each other and that’s what it is all about. We seem to understand how to play together, Seamus Hanafin is another who has been there for a good while and Cotsy (Cathal McNally) too. The experience that he and Cribbo (Keith Cribbin) have got from the senior team just brings the team on when they are there playing with the rest of the team,” he said.

“If we go one ahead, we try to push on and go two, three, four ahead. Especially against a team like Cork, you just can’t take your foot off the pedal because they are a good team. We just have to do the best we can and it would be nice if we could do the same to them as we did to Sligo but more than likely it’s not going to be like that match at all. It is much more likely to be like the match two years ago against Cork when it went right down to the death and then into extra-time.”

Of course the talented full forward doesn’t have to go too far if he needs some advice heading into the weekend’s big game. Big brother Emmet has been one of the best players in the country over the last five years and is always there for his younger sibling.

“There was never any pressure on me because of Emmet. You get the odd bit of stick during club games but I never felt any pressure. That’s probably down to him too, he was always there to help me along. He’s always there at the other end of the phone if I want to ask him. He comes to all the games too and he knows how I play and what I should be doing which is perfect. He’s been there all through my life, he knows exactly what I’m doing,” he said.

When the pair were playing football together in their back garden there were dreams of All-Ireland finals in Kildare jerseys. Emmet is still waiting for his shot at All-Ireland glory but Cian is determined not to let a second chance slip through his fingers.

By Ger McNally
Email Journalist
Contact Newsdesk: 045 432147
"
Against a team like Cork, you just can’t take your foot off the pedal"