CULLY CONQUERS EUROPE… … then heads for the sun 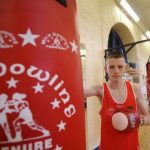 After winning gold at the European Youth Championships in Rotterdam on Saturday night (17 August) Kildare boxer Gary Cully was soaking up the Spanish sunshine on Monday.

The Naas fighter is spending the fortnight on a relaxing family holiday but back at his club, St David’s, he is causing quite a stir.

The southpaw, who was fighting in the flyweight (52kg) category, became Ireland’s latest boxing European champion when he beat Masud Yusifzada of Azerbaijan on a unanimous decision in the final of the 38 nation event.

Cully beat Dmitrijs Zaharous of Latvia, Krenar Zenal of Albania and Dzimitry Asmali Asanau of Belarus to reach the final and was so impressive along the way that not only did he walk away with a gold medal but he also picked up the best boxer award.

Paul Archibold – Cully’s coach at St Davids’ – is tipping to him to go on and become an Irish senior champion someday but for the moment he is the undoubted jewel in the club’s crown.

“It’s a great achievement for Gary and we are very proud of him in the club. We have some promising boxers in the club who are reaching national underage finals but he is the standout at the moment. He has boxed in the under-14 internationals already and I think he can go on and become a senior national champion someday,” said Archibold.

Cully has been training at the Naas club since he was eight and has won three underage national titles on his way up through the ranks. He is the current under-18 national champion after defeating Joseph McDonagh in the final back in May and the Naas man is young enough to be able to defend that title next year.

Jamie Hughes of Ryston was also part of the eight man Irish squad who travelled to Holland for the tournament. He beat Michal Urban from Slovakia in the last 32 of the 91kg category but was then defeated as he fought for a place in the quarter-final.