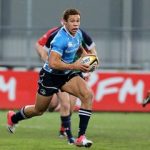 Leinster’s Adam Byrne is hoping to continue his breakthrough with the senior team this year
Photo: INPHO/Morgan Treacy

TO the thousands of fans gathered in Cill Dara, his face was insignificant amid the host of established national rugby stars on display at Leinster’s open training session on 9 August.

Yet Irish under-20 winger Adam Byrne is someone we might all be familiar with in the near future. The former Naas man became the youngest player to ever represent Leinster at the age of 18 years, 8 months and 20 days last January and he hopes to achieve even bigger things this year.

He was certainly taken aback by the number of people who turned up for his province’s open training day at Beech Park.

“It was a much bigger crowd that I expected. I think all the lads enjoyed the crowd and really stepped up the training today. It was a great experience for me and the team I think as well,” said Byrne.

“This year I still feel I have a lot to learn so I just want to keep my head down and keep working hard. If I do work on all the little things hopefully I will get a few opportunities and then it’s just up to me to take them and show what I can do. I’m really excited for this year and am really working on the little things in my game,” he said.

Training with some of the biggest names in the sport can only help flourish and to fulfil his undoubted potential.

“Just the little things you pick up off everybody, even in the academy, but especially the likes of Ian Madigan, Brian O’Driscoll when you get to train with them, Gordon D’Arcy too. The big thing with them is that they are all really helpful towards the younger players. Anything they do you are trying to mirror them, whether it’s taking the ball early, a little bit of footwork, eyeballing the defender. You pick up the little things and it’s really helped my game. They make a big difference when they all add up,” he said.

Byrne knows that if he keeps his head and works hard on his then chances will occur for him.

“You get a few opportunities throughout the year if you are playing well because obviously the Six Nations is on and injuries happen too. The main thing within the academy is development, in the gym, on the pitch. You’re just learning the skills so that if you have to fill in you are able to do a job. The big thing is when you are with the seniors you are at that level, you can’t be slacking. You have to know every move inside out,” he said.

“The likes of Jamie Heaslip, Sam Coughlan-Murray, James Treacy and a lot of younger lads coming through as well are from Naas. Around Kildare there are good set ups, not just Naas. Cill Dara, in the schools there is Newbridge College and Clongowes and plenty of other club teams too so yeah, Kildare are going well on the rugby side of things,” he said.