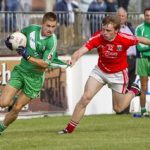 COUNTY champions Sarsfields could find themselves bowing out of this year’s senior championship before the quarter-finals if they come up short against their round three opponents Monasterevin this weekend.

The Sash enjoyed a convincing 14-point win against Ballymore in round one but were well beaten by 2011 champions Athy last time out. That means victory is a must in round three on Sunday.

“I think it’s a bit of second-year-itis,” says manager John Crofton. “We lost our midfield partnership from last year (Gary White and Matty Byrne), with both of the boys away on defence force duties and we haven’t managed to find a settled pairing there all season” he admitted.

Even allowing for those absenses, Crofton believes his side’s loss against round two opponents Athy owed as much to their opponent’s quality as it did to his own side’s shortcomings.

“We were very poor against Athy, they started with a higher tempo than us. They got an early five-point advantage on us and despite getting a goal early on, it didn’t help us. That’s a credit to Athy as well, they didn’t let us get up to the tempo of the game,” said Crofton.

Sarsfields began the season with a fully fit squad while midfielder Gary White came back into favour with Kildare manager Kieran McGeeney but with Defence Forces’ duty ruling White and Matty Byrne out of the club championship, Sarsfields found themselves looking for cover in the middle of the field. The absence of Dermot Earley due to a long-term injury didn’t ease Crofton’s headaches.

“We haven’t come up with a settled paring in the middle of the field so far this year, and with Dermot out we’re missing that option. Last year we had an abundance of players and there was competition for places, but this year we’re finding ourselves robbing Peter to pay Paul.”

Despite the lack of competition within the panel, Sarsfields can still retain their county title provided they overcome last year’s Leinster intermediate champions, Monasterevin. And Crofton believes that defeat against Athy the last day out may not be that detrimental to his side.

“A bit like last year when we were beaten in the first round by Naas, there is no safety net so I expect it to galvanise the boys now and I expect a higher intensity that what we got against Athy.”

With Kildare exiting the All-Ireland championship earlier than expected, the club championship is less congested than normal, which should be a help for the Sash.

“We should benefit from the three-week gap now, we had feared that we would be playing week in week out (if Kildare hadn’t exited championship), and with a few injuries we’re hoping with the extra couple of weeks would have them sorted,” said Crofton.

By tarabyrne
Email Journalist
Contact Newsdesk: 045 432147
"
There is no safety net so I expect it to galvanise the boys now"