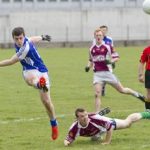 Emmett O`Keeffe, who’s out with a broken toe, will be a big loss this weekend for Castledermot in round three of the IFC

CASTLEDERMOT’S season will be on the line this weekend when they face Rathangan in round three of the intermediate championship.

After a narrow round two victory against Clogherinkoe to preserve their title ambitions, the south Kildare club must win against the Barrow to secure a place in the quarter-finals. And midfielder Garry Hendy believes this game could be the stepping stone to greater things this season.

“The last couple of years we have been in the quarter-finals, so our main ambitions is to get out of the groups and get into the quarter-finals, and take it as it comes from there,” said Hendy, who knows his side face a tricky task against Rathangan.

“We’re not looking past Rathangan, a quarter-final hasn’t entered our heads. We still have to get over Rathangan,. If we lose the next day we’re finished.”

Facing a must-win championship game against Division Two side Rathangan is a far cry from the ‘Dermot’s Division One league campaign, where they rubbed shoulders with some of the powerhouses of Kildare club football.

“We put a lot of emphasis into the league this year because we were in Division One for the first time, but championship football is championship football and it’s totally different from league football,” says Hendy, whose side finished comfortably in mid-table, notching up some impressive wins against Sarsfields, Confey, Carbury and Celbridge along the way.

In spite of these early season tussles Hendy is aware that championship football is a completely different animal to that of league.

“It can help alright but one of the main things is the work rate and the training has to be upped for championship,” said Hendy.

Castledermot have managed to unearth some young fresh talent for the current season – Emmet O’Keefe, Paddy Mahon, Ian and Gavin Farrell. O’Keefe suffered a broken two in the side’s round two clash with Clogherinkoe and will not be available the game against Rathangan. Hendy admits that this will be a big loss to his side but believes the ability within the squad leaves them in a position to fill this void.

“We’ll be hoping that the other young lads will be able do the job for us on the day. In fairness there’s good young lads there that are well able to step up to the plate as well, and there is good confidence through the squad,” said Hendy,

With the topic of youth being a very high priority down Castledermot way Hendy is very complimentary with what the young lads have brought to the set-up.

“They bring a bit of freshness and a lack of fear with them. These young lads have played at a good grade all the way up and have given it a good go. Losing the under-21 final as well gives them a bit of ambition this year. When you’re in Division One your playing the bigger teams like the Sarsfields and the Moorefields, it’s great to have those lads who play with a bit of freedom.”

With this influx of youth into the panel, it has had a positive effect on the panel as a whole. Even a stalwart like Hendy has enjoyed playing with each of his younger teammates.

“I think the young lads involved in the squad have been a massive help to us, most of then are under-21. Personally I think it’s great to see them young lads coming through and it’s nice to play with them so. I enjoy playing with them and I’ve enjoyed the year as a whole.”