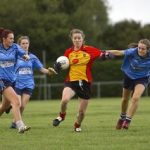 St Laurence’s Brianne Leahy on the attack against Eadestown

With a place in the senior championship semi-final up for grabs, St. Laurence’s got off to a blistering start against opponents Eadestown.

Hitting the back of the net inside the opening 17 seconds, Brianne Leahy had sent her side three clear early on. Eadestown desperate to keep hold of St Laurence’s coat tails struck moments later, Emma Sergeant pointing to leave two between the sides.

A ball over the top of the Eadestown defence found Fogarty sidestepping the challenge of Grainne Jameson, Fogarty sent a low ball along the surface under the body of Fiona O’Sullivan. Leahy pointed before a second from Bowes had St Laurence’s 2-3 to 0-1 ahead after ten minutes. A second Eadestown point done little to cut the deficit as Joeanna Cullen and Leahy extended the south Kildare side’s lead.

A third goal from the boot of Maggie O’Neill heaped more pressure on Eadestown. As Kate Leahy pushed forward, beating the entire Eadestown defence, just as she had goal in her sights the ball slipped from her grasp. With enough time to off load to the waiting O’Neill, O’Neill pushed the ball past O’Sullivan and into the net.

Within 60 seconds Eadestown found themselves awarded a penalty as they began to build a head of steam. Up stepped Clifford in an attempt to convert. Leaning back she sent her strike over the bar to point.

Cullen and O’Neill stopped the rut as they pointed to get St Laurence’s back to scoring ways again. Eadestown attempted to get their scoring under with Aoife Herbert pointing with seven minutes remaining but a final Fogarty point followed by a Louise Farrell goal extended the lead yet again before Niamh Lawler and O’Neill points rounded off the St Laurence’s scoring. A Cliona Dowling point rounded off the nights scoring as St Laurence’s marched into the semi-finals.