IFC team of the week

After the latest round of the Kildare intermediate football championship, Castledermot and Round Towers lead the way in the Kildare Nationalist team of the week. 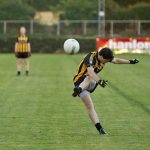 Towers had four points to spare against Eadestown in round three while Castledermot have bounced back from a first round defeat to Johnstownbridge and are now in the quarter-finals after wins against Clogherinkoe and an impressive round three win against Rathangan.

Caragh, Sallins and Clogherinkoe have two players each on the team while Ballyteague, Rathangan and Nurney have one player each.