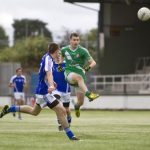 The Sash booked their place in the quarter-finals thanks to a high scoring second half display against Monasterevin. Celbridge, who impressed during their 0-16 to 0-9 win against St Laurence’s, also have four players in the side while Clane are next best with three, including county star Tomas O’Connor. Monasterevin have two players in the side after their superb battling display against the Sash, where they led by two early in the second half despite playing with 14 for most of the game, while Naas and Leixlip have one player each.