Lilies in search for new manager after clubs oust McGeeney 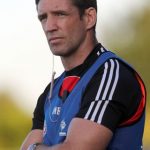 KILDARE begin the search for a new senior football manager today after the county’s clubs voted against Kieran McGeeney remaining in charge.

During a divisive county board meeting on Tuesday night (3 September) a vote was needed to decide McGeeney’s future. Despite the support of Kildare chairman John McMahon, Club Kildare Chairman Pat Mangan as well as the county players, McGeeney was ousted by one vote, 29-28. Club delegates and county board officers were entitled to vote on the night although Mangan, who has driven Kildare’s fundraising efforts throughout McGeeney’s six-year tenure, was refused after requesting a vote.

Mangan, who has worked closely with McGeeney since he took over in 2007, spoke passionately in favour of retaining the Armagh man while bemoaning the fact that ‘every Tom, Dick and Harry’ had a say on the night. His comments angered delegates and did little to help McGeeney’s cause. Anticipating a hot debate, county chairman John McMahon asked local media representatives to leave before the discussion on McGeeney’s future began.

When the verdict was revealed, Kildare’s captain in 2013, Eamonn Callaghan, reacted with fury, tweeting: “I’ve never been ashamed in my life to be a Kildare footballer, until tonight.” Veteran forward and former all-star, John Doyle, took to Facebook where he described it as ‘black day for Kildare GAA.’ “I’ve never felt as empty,” Doyle posted, prompting speculation that the 36-year-old will now retire because of the decision.

The county will now begin the search for a new manager. Kerry coach, Cian O’Neill, who is a Kildare native and previously coached the county minors, has already expressed an interest in managing Kildare while Glenn Ryan, who captained the county to Leinster titles in 1998 and 2000 as well as managing the county under-21s to an All-Ireland final in 2008, ruled himself out of the running earlier this summer after stepping down as Longford senior manager. It’s likely that clubs will push for a Kildare man to take charge after six years with an outside manager.