IN THE NAME OF HER MOTHER AND FATHER 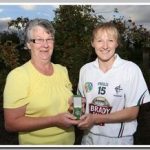 If ever a child was destined for sporting success then it was surely Róisín O’Connell. O’Connell, a PE teacher at Oaklands Community College in Edenderry, developed a love of sport from her parents and at the moment plays camogie for Johnstownbridge and Kildare, football for Ballykelly, basketball for Ballyroan Shamrocks. Previously she has devoted huge time to badminton and Irish dancing.

Her father, Jack, was a highly decorated hurler who won county titles into his 40s with Coill Dubh as well as six All-Ireland titles for Kildare. After such a distinguished career it was no surprise to see him named on the Kildare hurling team of the millennium.

It’s not just on the male side of the family where O’Connell’s sporting brilliance lies because Róisín’s mother was also voted onto the Kildare camogie team of the millennium. Nuala Malone captained Kildare to Leinster success in 1969 and 1981 and the proud mother will be in Croke Park on Sunday to see her daughter follow in her footsteps by running out on the hallowed Croke Park surface.

As Nuala recalls, they were very different times back in 1969.

“It was a different game altogether back then. We had no dressing rooms, we just got changed at the side of the pitch, throw all the clothes in a bundle and get on with. We had no transport back then either. I lived in Allenwood but was playing for Rathcoffey so whoever was the secretary of the club at the time would come and collect me at the bridge in Allenwood. We were all the same back then, nobody had transport. In fact we used to ride bicycles to some of the matches. Transport was lot different back then, there were ten of us in the family, eight lads and two girls and our father was a Bord Na Mona worker. Money was to rear the family and that kind of thing, there was no thoughts of buying a car.”

Nuala was just 17 when she captained Kildare in the Leinster junior camogie final in Croke Park in 1969 but there was no All-Ireland series for camogie at the time.

“It was just an ordinary game that happened to be in Croke Park, there was no such thing as a fuss or anything like that. You brought two hurls, got your lift to Croke Park and that was it. Kildare played three matches against Louth in Croke Park that day and we were the only ones to win. The hurlers and the footballers played and lost and then we won our final in the third of the games in the evening. That was 27 July, 1969. It was all the old stand there at the time. It was Croke Park and we were delighted to be at Croke Park but when we won there was no such thing as celebrating, we just came back to Lawlor’s Hotel in Naas which was there at the time. That was the only time we got a cup of tea and a sandwich after a game, not like they have nowadays when they get their food after training and matches. We never got nothing like that.”

12 years later, Nuala again captained Kildare to Leinster success although that final wasn’t played at Croke Park. There were also O’Connell family links to the 1990 team that lifted an All-Ireland Junior title with Nuala’s sister-in-law, Miriam Malone, captaining the team.

Should Kildare emulate the ’69 team and lift silverware at Croke Park on Sunday, the celebrations are likely to be a little more raucous than back in those innocent times.

“It’s great for the whole lot of them and it’s going to be great for us,” said Nuala. “Myself and Jack played at Croke Park so it will be great to see Róisín follow in those footsteps. Not that we were pushing her towards that, don’t get me wrong, she has done it all herself. We do encourage her but sometimes she thinks that encouragement is giving out to her. Everybody we are talking to on both sides of the family is talking about going now. We’ll have to wait until Sunday to see who turns up but it’s going to be a great occasion for them.”

It’s an occasion that Róisín is determined to enjoy but is equally determined to return home with a trophy. The team was in Croke Park last weekend to take a tour of the ground which will hopefully help with any nerves that might kick in.

“We just had a look around,” said Roisin. “We saw the Liam McCarthy Cup and we were in the dressing room that we will be in next week. We weren’t allowed on the pitch but when we were looking out we said that if you just focus on the goals and the pitch it’s just the same as any pitch. Once we get into the warm-up and get the first five minutes over we’ll be fine. All year we have been saying we have to get to Croker, we have to get to Croker but now but now the focus is completely on winning the game.”