IFC team of the week 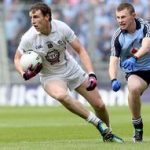 After quarter-final weekend in the Kildare intermediate football championship, Castledermot, Ellistown and Kilcock are leading the way in the Kildare Nationalist IFC team of the week.

All three sides have three players on the team having qualified for the semi-finals. Castledermot defender Vinny Dowling and forwards David Keating and Paddy Mahon all played a huge part in their quarter-final victory against Raheens. Kilcock had two points to spare against Round Towers – goalkeeper Ciaran Heneghan, corner-back Eoin Powderly and forward Shane O’Rourke made the cut after an impressive victory. For Ellistown, who drew with Ballyteague, wing-back Gary Kinahan, midfielder Enda Noons and forward Andy O’Neill, made the line-up.

Their Kildare town rivals Round Towers have two players on the team as do championship favourites Johnstownbridge while Raheens and Ballyteague have one each.