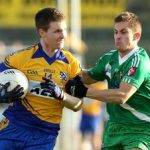 The Sash have three players in the team following their epic quarter-final victory against Confey. Defenders Conor Duffy and Conor Tiernan as well as forward Ray Cahill made the cut while Alan Smith and Donnachadh McDonnell narrowly missed. Athy defenders David Hyland and Eddie Delahunt made the cut after impressing against Celbridge as did midfielder, Mick Foley, while freetaker Darroach Mulhall was unlucky to miss out.

Confey’s towering midfielder Paul Divilly as well as ace attacker James Gately – who had a phenomenal shooting display, scoring five from play and seven it total – also made the lineup. Moorefield, Clane and Celbridge have two players each while Eoghan O’Flaherty’s impressive eight-point haul for Carbury against Ballymore in the relegation semi-final is also recognised.