Lilies in search of elusive All-Ireland 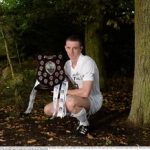 KILDARE have stuck with the same starting 15 for Saturday’s (14 September) All-Ireland under-21 B Hurling Final against Kerry.

The Lilies endured a nail-biting semi-final against last year’s champions, Roscommon, fighting their way back from the brink to earn a one-point win. After that dramatic 2-11 to 2-10 victory last month, manager Noel McMahon has kept faith with the same starting 15 for tomorrow’s decider in Thurles against the Kingdom.

There will be concern surrounding star forward, Gerry Keegan, who has been nursing a shoulder injury but the management have decided to risk him from the start. He was forced off early on in the semi-final victory against Roscommon on 24 August. Having captured the Leinster B title for the second year in a row, the Lilies were on the brink of exiting the championship during their All-Ireland semi-final against the Rossies.

The Lilies looked dead and buried early in the second half when they fell ten points behind but an incredible finish saw them take down the reigning champions to book a final date against Kerry.

Second half goals from Fergal Conway and Ryan Casey propelled Kildare to victory against a shell-shocked Roscommon side. With the last poc of the game, captain Mark Delaney pointed a 30-metre free to clinch the most dramatic of victories.

Delaney, captain this year, will be a key figure for Kildare if they are to win. Named at wing-forward, he will be target of Paddy McKenna’s puckouts and his impressive scoring returns for both club and county this year will need to be replicated against Kerry. The Lilies lost last year’s final by the minimum so both sides freetakers will play a vital role.

Kildare may be vulnerable at the back, having conceded two goals in their semi-final victory, but they have no shortage of goal-scoring threats up front. Ryan Casey hit the net for his club, Coill Dubh, in the Kildare senior hurling championship at the weekend, while Evan Dempsey has spearheaded Éire Óg’s run to the semi-finals of the senior championship.

As well as seeking an All-Ireland crown, Kildare will be on the hunt for revenge having lost out to Kerry in the 2010 All-Ireland minor B hurling final. Seven players remain from that squad although the Lilies are short Conor Kenny – who transferred to Tipperary late last year – as well as players from Naas, who decided not to make themselves available for this year’s campaign after a row over fixtures.

Kerry come into the final cold, after they were left without a semi-final game when Tyrone withdrew. Kildare should hit the ground running, indeed they’ll have to, if they’re to capture that elusive All-Ireland title.