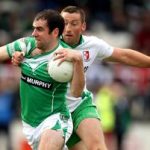 After the final weekend of quarter-final action in the Kildare senior football championship, 2010 champions Moorefield dominate this week’s Kildare Nationalist team of the week.

The Moores enjoyed a convincing six-point win against Clane on Friday night, where Ger Naughton, Kevin Murnaghan, David Whyte, Ronan Sweeney and Adam Tyrrell caught the eye. Earlier in the week, St Kevin’s secured their senior status for 2014 with a comprehensive victory against Suncroft. The classy displays of defender Darren Fox as well as forwards Declan Flaherty and Barry Noone saw them make the best 15 this week.

A nailbiting encounter between Maynooth and Naas on Sunday evening ended in a one-point victory for Naas, who came with a late rally to take the spoils in the last of this year’s senior quarter-finals. Between them, seven players made the team of the week, Maynooth with four and Naas with three players.