Ryan return on the cards 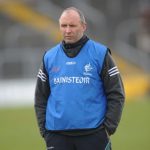 Glenn Ryan, who managed the Kildare under-21s to an All-Ireland final in 2008, is on the verge of a return to Kildare

FORMER Kildare captain Glenn Ryan is in pole position to take over as the county’s senior football manager.

Ryan, who stepped down as Longford manager this summer, met with Kildare GAA chairman John McMahon on Monday (23 September) morning. After a long and detailed conversation, Ryan was non-committal about whether he would take the job if offered the position.

“I don’t know whether I would or not. It’s not something that I have been thinking about one way or the other. I’ve a few things on at the moment and I’ll just focus on them for the time being,” said Ryan, who spent five years at the helm in Longford.

The Round Towers man led the Kildare under-21s to an All-Ireland final in 2008 before taking the reigns in Longord. Ryan had only retired from a decorated inter-county career in 2006. Having captained the Lilies to Leinster titles in 1998 and 2000, he has long been seen as a future Kildare manager.

It is expected that Kildare GAA Chairman John McMahon, who is on a solo mission to find the next county bainisteoir, will have a proposal to put before the next county board meeting, which takes place on Tuesday, 1 October.

Last week, former manager Kieran McGeeney issued a statement, which made it clear that he won’t be returning to the helm.