Johnstownbridge dominate team of the week 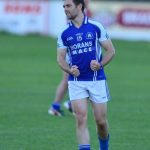 INTERMEDIATE championship favourites Johnstownbridge lead the way in the latest Kildare Nationalist team of the week.

After their emphatic semi-final victory against Ellistown, the Bridge dominate this week’s side with six players on the team including players in defence, midfield and attack. Their 2-14 to 0-3 victory was as complete a performance as has been witnessed in this year’s championship at any grade and with players like James O’Connor, Luke Flynn, Cian Farrell, Sean Hurley, Paul Cribbin and Niall Vaughan in their ranks, they will be very hard to beat in the final.

The team in full: