SCULLY STARS FOR HER COUNTRY

CILL Dara RFC has another Irish international to add to its growing list of players who have represented the country with distinction. Muireann Scully became the latest star from the Kildare club to play for Ireland when she lined out for the Irish provinces’ sevens team who took part in the Sainsbury’s 2013 Schools Games in Sheffield from 12-15 September.

Scully played at centre on the Irish team that competed in a tournament against schools sides from England, Scotland and Wales. The Irish girls finished fourth overall and getting the opportunity to play for her country was a dream come true for the Newbridge College student.

“I was so happy when I found out I got picked, it was a fantastic feeling to get to play for Ireland,” said the delighted teenager. 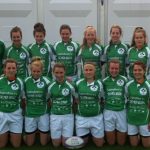 Cill Dara starlet Muireann Scully – front row, third from left – with the Ireland under-19 7s side that played in the Sainsburys 2013 Schools Games in Sheffield from 12-15 September

The Leaving Cert student had to undergo a rigorous selection process before she was picked as one of the 12 girls who would make the final panel.

“There were trials in a few locations across the country earlier in the summer and I went up for one of them and got through that and then we had five weeks’ of screening camps before we were called up to the last squad.”

What makes Scully’s Ireland debut even more remarkable is that she only took up the sport two years ago. Coming from a family that is passionate about sport, and rugby, Muireann and her sisters had always wanted to play rugby but until Cill Dara began fielding girls’ teams, the Scully sisters had no outlet for their passion.

“Sport was always something we were encouraged to play at home, whether it was football, rugby, or soccer, any sport really that we wanted to take part in, we were allowed. All our family love sport,” she said.

The Scully family made the journey from Kildare to Yorkshire to watch Muireann make her Irish debut and being able to see them on the sidelines, cheering her on in the competition was a brilliant boost to Kildare’s latest rugby star.

Between studying for her Leaving Cert, playing football for the Kildare minor team and her club Kildangan-Nurney as well as hockey with her school, Newbridge College, the sports-mad 17-year-old has little time for anything else. She isn’t looking too far into the future but she has ambitions to play for Ireland and perhaps follow a sporting career path.

“I love playing rugby and watching the Irish ladies team win the Grand Slam earlier this year really made me want to play for Ireland. I hope to continue playing sevens rugby and there is a chance that Ireland might qualify for the Olympic Games in 2016 in Rio De Janeiro and if I got the opportunity to play on that team I’d love it. I’m not sure yet what I want to do when I finish school but I think I would like to have some involvement in sport.”

By Brendan Coffey
Sports Editor
@coffeybrendan
Email Journalist
Contact Newsdesk: 045 432147
"
I was so happy when I found out I got picked, it was a fantastic feeling to get to play for Ireland"