‘Bridge ready to break through 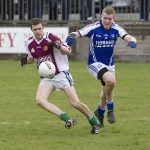 No matter what the result in Saturday’s intermediate football championship final, the Hugh Campion Cup will be residing in unfamiliar territory for the next 12 months.

It’s more than 25 years since Johnstownbridge or Castledermot won the competition but an influx of quality young players to both panels has led to them making a final that should prove a fascinating affair.

Making the final will feel like huge progress for Johnstownbridge. Having lost five semi-finals in the last eight years, getting through the penultimate stage was a major mental test.

They looked untroubled by the burden of recent failures as they brushed Ellistown aside.

It’s been a long time in the wilderness for the ‘Bridge since their glory days of the 1980s. No club won as many senior titles as Johnstownbridge in that decade but they haven’t been back to a county final since they last won the senior championship in 1989.

Under Offaly manager Emmet McDonnell they have prospered this year and it seems they now have the mental strength to go with the undoubted talent in their squad. Very few senior teams, never mind intermediate sides, have the selection of inter-county players like they do. They have pace and power in every line. Sean Hurley in midfield will carry a lot of their hopes but there is serious firepower in a forward line containing Keith and Paul Cribbin, Cathal McNally, Niall Vaughan and Dan Flynn.

They won’t have things as easy as they did against Ellistown when they come face to face with a very organised and determined Castledermot side in the final. This is their first time in the intermediate final since losing to Rheban in 1997 but they have been building steadily since they won the junior final in 2004.

Many of their players have experienced big finals in recent seasons and four of their panel have played in under-21 A and B finals as well as the county minor A final in 2011. Of those, Gavin Farrell and Emmet O’Keefe can be expected to have the biggest impact with Farrell in particular crucial to their gameplan. If he can help his team win the possession around the middle third, where Castldermot are also very strong, then they have every chance.

It goes without saying though that if Tomás Harney’s Castledermot team are to walk away with the title then they will need the Mahon brothers in the full-forward line, Paddy and Eugene, at their absolute best. The battle between Johnstownbridge full-back Luke Flynn and Eugene may be worth the admission fee alone but even more important for Johnstownbridge will be how they handle older brother Paddy. It may be county junior corner-back James O’Connor who is charged with that job and he is certainly as capable of shutting Mahon out of the game as Mahon is of grabbing the match-winning scores.

The bookies are sure to have Johnstownbridge as favourites and that is only right given the players at their disposal but they have faltered before under the weight of expectation on their shoulders and should they do so once more, Castledermot are more than capable of taking advantage.