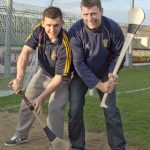 PLAYING senior hurling came easy to 18-year-old Evan Dempsey when he broke onto the Éire Óg first team three years ago but playing alongside his father brought its own unique, problem.

“At this stage it’s second nature playing senior,” he says, “but I had to get into the habit of not calling him Da on the field and start calling him Joe.”

His father has been playing senior with the club for almost a quarter of a century so Evan has plenty of years ahead of him but he may not get another chance to win a county title playing alongside Joe.

“It’s been a childhood dream of mine to get to a county final but to be able to play with my father is very special,” says Evan. “I even said it to Ma at the start of the year because Dad would never pick up injuries and this year his hip and a few things are at him and that just drove me on so much and I just want to win it so much for him. To win it for him would mean more to me.”

The last time Eire Og played for the senior hurling championship title, Evan was the team mascot. Just three at the time, he doesn’t remember much about the 1999 county final though he has plenty of pictures at home to remind himself of the occasion. Ever since, a hurl has never been far from his hand and his father has been guiding every step of the way from under-7s through to minor, under-21 and now senior.

“I was 4 or 5 when I started. There was always a hurl in the hallway. Dad taught me everything between getting up and protecting your hand to just showing for the ball. He’s a legend in my eyes.”

Together they’ve formed a formidable partnership up front with Eire Og while Evan has been leaving his mark on the inter-county stage, helping Kildare to a Leinster under-21 title this year while he came within seconds of adding an All-Ireland crown in September.

College has taken him away to Athlone but the teenager loves nothing better than travelling home for training, especially now that the club are preparing for the biggest game of the year.

“I love going training. The buzz this week is unbelievable. I’ve never experienced anything like it,” he says but God knows what it would be like if Eire Og were to bridge a 29-year gap and recapture the senior hurling title.

“I just want to win it so much for Dad because he deserves it so much,” says Evan and he leaves you with no doubt but that he’ll do everything he can to ensure his father gets his hands on that precious county medal.

By Brendan Coffey
Sports Editor
@coffeybrendan
Email Journalist
Contact Newsdesk: 045 432147
"
To be able to play with my father is very special"