Hendy hoping to make most of glory days 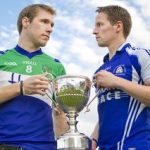 HAVING waited nine years for another crack at a championship final, Castledermot midfielder Garry Hendy knows that these are the glory days.

Now 30, Hendy is a seasoned veteran having started playing first team football with the south Kildare club as a teenager 13 years ago. He has become one of their most important players over the last decade, holding the forte in the middle, but Saturday’s intermediate football championship final will be new territory.

“This will be the biggest game I’ve ever played,” said Hendy ahead of the decider with Johnstownbridge. “These are days to look forward to, this is what you start training in January and February for.”

Since winning the junior championship in 2004, Castledermot have made serious progress at underage level and it’s because of the hard work behind the scenes that Hendy and co are getting a crack at another final.

“In fairness to the club, there’s great work being done at underage and we’re reaping the rewards now. We’re never blessed with big numbers, we’ll always have the bare 15 but if we can work on them and bring them through to the senior squad it’ll do for us,” said the towering midfielder, who has seen his club contest minor A and under-21 A championship finals in recent seasons. Victory eluded them on each occasion but making those finals is success in itself for a club the size of Castledermot.

“Football is a bit of a religion in Castledermot,” Hendy says, explaining how a small, rural club has come to the fore in a football-mad county. “The youth end of things has been a big element for us. They’ve brought a new freshness and a bit of a drive to it. They had their bit of hard luck last year in the under-21 final.”

After losing last year’s under-21 final to Celbridge by two points, 1-12 to 1-10, Castledermot have continued to progress in 2013 with a solid campaign in Division 1 of the senior football league. Saturday’s intermediate final is a new experience for the club’s older brigade but so too was this year’s league.

“It was my first time playing Division 1,” said Hendy. “When I started, we were in Division 4. We’ve played every Division. For us, every league game we out went this year was like a championship game. We’ve beneiftted from that. It’s brought us on leaps and bounds.”

They picked up six wins during the league, including an eye-catching 1-11 to 1-6 victory against reigning senior champions Sarsfields, and they finished the season comfortably in mid-table. Holding their own in Division 1 has given them huge confidence but they had to dig deep in round two of the championship to stay in the running. Trailing Clogherinkoe by one with 15 minutes to go, they scored 1-4 in the final quarter against the breeze to keep their championship hopes alive.

“That was probably the making of us in a way,” said Hendy, reflecting on that 2-10 to 1-9 victory against last year’s junior champions. “We definitely beneiftted from that game.”

They certainly don’t lack resolve and have come through tight encounters with Rathangan, Raheens and Kilcock – their winning margin was two points in each game – en route to the final. Having lost to Johnstownbridge in the first round by nine points (2-12 to 1-6) they will be underdogs on Saturday but it’s not as if they’ve grown up with the favourite’s tag.

On the evidence of this year, they’re more than ready for the demands of senior football.

By Brendan Coffey
Sports Editor
@coffeybrendan
Email Journalist
Contact Newsdesk: 045 432147
"
Football is a bit of a religion in Castledermot"