LEADER OF THE ATTACK 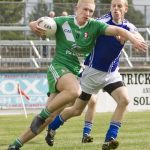 Having been substituted in last year’s county

light of the Sarsfields attack in 2013

The Sarsfields lads were down fairly quick to get the flags up along the bridge and to make sure they got that spot. It looks well now to be fair to them. I don’t mind the build-up at all, it’s all a bit of craic. Even on Twitter, everybody is having the craic. I suppose all the talking would make you a little more nervous because you don’t want to be letting anybody down – it does put a bit of pressure on you.

You’d be nervous in the morning going into a game like that but as soon as you get into the warm-up with John Doran you just forget about it. It’s that intense and you are so focused on the match that by stage it’s just the same as any other match. All you want to do is play and to beat them.

The day after the semi-final against Naas we went down to The Gables Leisure Centre for a recovery session. On Wednesday we had a tough training session – John Doran ran us hard. Next week it will be mostly ball work. John Crofton will have us calm and relaxed. We have a set routine for every game. We’ll meet up in Sarsfields and then get a bus down together. We’ll go out then and do the warm-up with John Doran and get straight into the game. It’s the same routine we had last year and we are used to it now.

Last year I picked up an injury in the semi-final against St Laurence’s and I wasn’t training in the lead-up to the final. I was a bit worried going into the game to be honest and I was devastated when I was taken off in the game. I’m training hard in every session now and I’m hoping that I’ll have a better final than I did last year. Last year I was getting injections and worrying about going to the physio but this year I’m going down early and getting a good kickaround before training and I can practise my frees and stuff like that.

Ronan (Fitzgibbon) and Barry (Coffey) have really stepped up this year. Barry has probably been our best player all year. He is great for the forwards, he was only moved to wing-back because of a few injuries and he is absolutely flying now. Even Donnachadh McDonnell, he was moved from wing-back to full-back and is playing out of his skin. Dermot (Earley) is brilliant around training, he lifts the intensity of everything we do. Even after training, he’ll give you bits of advice about what you should do. You want to train harder when he is around because he has such a high status.

In the middle of the year we lost a few lads and John Crofton came up to me and told me that I was going to have to step up because in the forwards Alan Smith would be the only one older than me. John told me that me and Smithy had to step up and I’m hoping I’ve done that. If there is any time to stake a claim for a place on the county team then a county final is it. There are a few lads on the Sarsfields team that would love a chance, even a trial. There were a few lads last year disappointed that they didn’t get called in but a final is a great chance to make a statement of how good you are.

Gary White, Matty Byrne and Caoimhghin McDonnell were a big loss around the middle of the field, they were our base. It meant that Deccy McKenna had to go to midfield, Sean Campbell had to go in. The boys did a good job but you would miss the likes of Matty and Caoimhghin, even at training. They are big players, even in the runs, they’d always be up the top. With Chalky gone as well we were struggling at midfield but thank God we got to terms with it.

The Confey game (quarter-final) gave us great belief. That was a huge match. Confey were flying all year and we were worried going into that game. They beat us by 10 points in the league, they destroyed us. We were worried about it but I think we showed great character to come back and beat them in the way we did. It really gave us the belief that we could go and win this.

In conversation with Ger McNally

Filed under: GAA, Kildare SFC Final, Moorefield, Ray Cahill, Sarsfields
By Brendan Coffey
Sports Editor
@coffeybrendan
Email Journalist
Contact Newsdesk: 045 432147
"
The Confey game was a huge match. It really gave us the belief that we could go and win this."