Glavin fighting to win the race against time 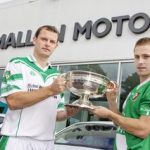 THREE years is a long time for a modern Moorefield footballer to wait for a county final.

An injury victim in 2010, this year’s team captain Ross Glavin has endured an even longer absence, one that his generation are not used to. The 28-year-old, who is a Captain in the Defence Forces as well, won his first championship in 2002 and Sunday’s clash with Sarsfields will be the club’s fifth final since then.

After bowing out at the quarter-final stage last season, the Moores could only watch on as their neighbours won the title.

“It’s an added incentive,” says Glavin when asked if Sarsfields’ success motivated the Moores. “The fact we haven’t won or been near a final in three or four years is enough incentive in itself to get our own act together and make sure we’re well prepared.”

The passage of time is something that Glavin is all too aware of and having suffered serious knee injuries in recent seasons, he knows that time waits for no one.

“We haven’t been there since 2010 and everyone’s getting on a bit now so we feel that we might be running out of a bit of time so while we’re there we’ll try to make the most of it.”

Glavin has moved into defence this year, slotting in at centre-back without much difficulty, but he may well have to revert to midfield on Sunday as Moorefield count the cost of their absentees – Daryl Flynn and David Whyte. An older and wiser footballer, Glavin knows where the team’s strengths now lie.

“We might have lost a bit of pace but what we’ve lost there we’ve gained in experience so we’ll be looking to use that to our advantage,” he says. “If I can stay in third gear as long as I can, I’ll be happy.”

Third-gear action is not what you’d expect from a county final featuring the two Newbridge sides. Already the tension is building around the town.

“It does bring an extra bit of spice being a local derby – you’ll have some people fighting over a flagpole in the town,” Glavin admits. “There’ll be territorial aspects to it too. There’ll be a good buzz around the town but once that whistle blows, it doesn’t matter who you’re playing, it’s just about that 60 minutes and it’s just about lifting that cup and coming out on top.

By Brendan Coffey
Sports Editor
@coffeybrendan
Email Journalist
Contact Newsdesk: 045 432147
"
We feel that we might be running out of a bit of time"