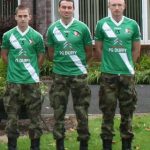 Pte Conor Tiernan, Comdt Padraig Brennan and Pte Ray Cahill from Sarsfields who are all Curragh-based members of the Irish Defence Forces

THERE were moments when Sarsfields must have doubted they’d even get this far.

Well-beaten by Athy (0-16 to 1-8) in the second round, they were in a hole against Monasterevin during a frustrating round three game. Despite having an extra man for 52 minutes, they were 8-6 down early in the second half. Half an hour later they had 3-16 on the board but the cracks appeared again in the quarter-finals against Confey. With 12 minutes to go, they trailed by four points. That they ended the game in front surprised their captain, Conor Tiernan, as much as anyone else.

“I was very surprised that we fought back like that,” says Tiernan. “Ususally Sarsfields teams wouldn’t be renowned for fighting back like that but all the lads dug deep and we came out with the result and it lifted us big time.”

It has been a frustrating year for Sarsfields but then it was never likely to be as smooth as 2012, when they won all three senior titles in Kildare. Recapturing the style and spirit which took them to the county title was made all the more difficult by the loss of midfielders Matty Byrne and Gary White, who had to travel overseas on duty with the Defence Forces.

“It’s been tougher coming back this year. Training-wise, we’ve kind of done the same. Missing the two lads (White and Byrne) has been tough. Everyone’s been writing us off and everyone is surprised that we actually got this far but fair play to our lads. They’ve been training hard and they all believe, that’s why we’re here,” says Tiernan, who is a three-star private in the Defence Forces.

The 25-year-old was chosen as captain at the start of the year but he has become a veteran by default. With White and Byrne absent along with the injured Dermot Earley, Tiernan suddenly became one of the most experienced players on the pitch. This will be his fifth county final, having been part of the squad as a teenager in 2005, when the Sash reached the Leinster final. It will also be his third time to face Moorefield in the final.

“It’s totally different,” he says of the all-Newbridge clash. “The build-up to it, the town, the buzz. Everything. It’s totally different to playing a county final against anyone else – everyone’s just totally focused. There’s the pride of the town and everyone’s friends because we all grew up together and we all went to school together.”

Friendships will be put to one side, for 60 minutes at least, because for Tiernan and his teammates they have yet to experience a victory against their great rivals in the finals. If revenge wasn’t enough motivation, the Sash are also seeking to emulate the Moorefield teamwho won back-to-back titles in 2006 and 2007.

“We don’t really think about two in a row, it’s another county final and there’s only going to be a kick of a ball in it,” says Tiernan. “A Sarsfields-Moorefield county final is always helter-skelter stuff.”

Winning a second would be all the sweeter for Sarsfields, considering the hurdles they’ve had to overcome in 2013. At half-time against Confey, their manager, John Crofton, laid it on the line to them.

“Crofton said to us, ‘everyone’s writing us off and we’ve nothing to lose’,” Tiernan recalls but on Sunday they have to put their title on the line against the greatest rivals. Expect fireworks.

By Brendan Coffey
Sports Editor
@coffeybrendan
Email Journalist
Contact Newsdesk: 045 432147
"
Everyone's been writing us off and is surprised we actually got this far"