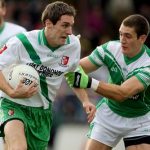 White knights: The absence of Sarsfields’ Gary White and Moorefield’s David Whyte could have a big bearing on the outcome of Sunday’s SFC Final

THERE is always more than a county title at stake when Moorefield and Sarsfields meet in the Kildare senior football championship final. Given that the Sash go into Sunday’s final as reigning champions, there is even more spice to the occasion.

Between them, the two Newbridge clubs have won nine of the last 14 titles. And even though at least one of them has featured in eight of the last 10 county finals, it is now three years since they locked horns in the championship. While both teams have enjoyed much success in recent years, chances like this don’t come too around too often.

Unbeaten in this year’s championship and with the league title already under their belts, Moorefield justifiably go into the game as favourites. Having bowed out at the quarter-final stage last year, they had some soul-searching to do over the winter months. As much as it hurts them, Sarsfields winning the championship might have been a blessing in disguise. They certainly didn’t lack for motivation in 2013 – which was apparent as early as March when they captured the Aldridge Cup, beating Sarsfields convincingly in the final for good measure.

They lost just three games in the league en route to winning Division 1 although Sarsfields struck a significant blow with a stunning 4-7 to 3-9 victory in round six. That may well turn out to be the game of the year but Sunday’s final promises even more if both sides go for the jugular.

Although Moorefield are unbeaten in the championship, they have stuttered at times and they were nearly caught out by Clane in the quarter-finals. By then Sarsfields had recovered from a demoralising defeat to Athy in round two and were through to the semis after a brilliant one-point victory against Confey. As important as semi-finals are, it might well be the case that those quarter-final games were the making of both sides.

Moorefield got an extra game, one they probably needed, courtesy of their replay against Clane, while John Crofton’s remodelled Sarsfields team grew in stature through the course of that amazing clash with Confey. For both clubs, those games showcased them at their best, and at their worst.

The Moores have built from the back this year, going so far as to change their ‘keeper. You have to play well to keep Tom Corley out of the side and Tom Kinsella has been doing just that. Although he didn’t have many saves to make against Athy, his kickout has been his strong point. The Moores have dominated the middle this year and have been winning more than two-thirds of their own kickouts in their last three games. In the first half of their replayed quarter-final against Clane, they won all eight of their first half kickouts.

They will certainly have an edge on Sarsfields when it comes to winning primary possession. Against Confey’s big men in the quarter-final, the Sash could hardly get their hands on the ball in the third quarter. They ended that game with a 50 per cent success rate on their own kickout. In the semi-final against Naas that improved to 58 per cent, thanks in no small part to the returning Gary White, who picked up four kickouts. But they still had problems in the second half of that game and lost the kickout battle 15-8 even with Dermot Earley on the field for the last 16 minutes.

Having Earley and White available – a big if in White’s case as he returned to his military duties in the Lebanon the day after the semi-finals – will be a massive boost for Sarsfields, especially if they need to win ball in the closing stages. Moorefield, even without Daryl Flynn – who was their leading ball-winner against Athy – are a formidable force in the middle third and if they have David Whyte back for the final – again no guarantee because of his commitments with the Defence Forces – he will more than make up for Flynn’s absence.

The fact that Moorefield won without Whyte in the semi-final is an ominous sign for Sarsfields. In two games against Clane, Whyte played some of the best football of his career and was a pivotal figure in both games. In the drawn game he won two kickouts and scored two fine points from play. In the replay, he was even better – kicking five points and claiming four kickouts. His shooting display that night was arguably the best in this year’s championship. He was flawless from play – two out of two – and flawless from frees – three out of three. The fact that his haul included a 45 and a free from outside the 45 means that Sarsfields will have to be ultra-cautious at the back – even a foul between the 45 and 65 could be punished.

In a tight game, the freetakers become even more important and Moorefield have no shortage of reliable shooters. Like Whyte, Ronan Sweeney has been excellent, kicking four out of four in his last three games – all of them from challenging angles close to goal. Adam Tyrrell’s left foot is another valuable asset. He’s kicked seven out of 10 in four games since August while he has only missed one free from six in his last three games. You pay an expensive price if you concede a free within scoring range against Moorefield but their own foul count should give them cause for concern.

They have conceded at least 20 frees in each of their last three games. Against Clane, they fouled eight times inside their own 45 in both games, while they conceded 11 inside the 45 against Athy. They have been riding their luck to a certain extent. Conor Murphy’s shooting was poor in the drawn quarter-final while Athy had a nightmare from frees in the semi-final.

You would expect Sarsfields’ Ray Cahill, given his form this season, to punish any indiscretions. He is the second highest scorer in this year’s championship with 0-26 in five games and 18 of those have come from frees. In his last two games, he has scored seven out of nine frees – a healthy return. The lack of a natural left-footed forward in the starting six could be a problem for Sarsfields but Padraig Brennan has featured off the bench in the last two games and he is arguably the finest left-footed forward still operating at this level. It maybe that the Sash management consider starting Brennan for that reason alone – they’ll definitely want him on the pitch at the finish in case they get a crucial free on the right-hand side.

On the whole, there is no doubt that Sarsfields are stronger up front. They landed 70 per cent (19/27) of their shots against Naas – an incredible performance they’re unlikely to repeat – while Moorefield hit just 44 per cent (11/25) against Athy. The Moores are unlikely to be that poor again and they have been hitting big tallies in this year’s championship. Their average score of 19.4 points is just behind Sarsfields (19.6) although Sarsfields have averaged 21 in their last three games while the Moores have slipped below 18.

Defensively the Moores have the edge – conceding 0-12 on average as against 13.4 for Sarsfields – but over the last three games the Sash defence has become meaner, taking their average concession down to 12. While Moorefield have been the team of the championship, it’s clear that Sarsfields are coming good at the right time. It’s not the only thing the reigning champions have going for them. A chance to win two-in-a-row, which will give them a shot at emulating the great Sarsfields team of the 50s who won three, only comes around once and having lost the 2010 final to Moorefield, they’ll have revenge on their minds as well.

This will be fifth final meeting between the sides since 2001 and the last three (2002, ’07, ’10) have all gone to the Moores. This Sarsfields team look well placed to end that 12-year wait.

PUT THIS IN A PANEL

Filed under: Football, GAA, Kildare SFC, Moorefield, Sarsfields
By Brendan Coffey
Sports Editor
@coffeybrendan
Email Journalist
Contact Newsdesk: 045 432147
"
While Moorefield have been the team of the championship, it's clear that Sarsfields are coming good at the right time"