MURPHY MAKING THE MOST OF SIX NATIONS SUCCESS 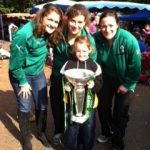 TROPHIES have a magnetic effect on people as Irish centre Jenny Murphy has found out over the last six months. The Kilcullen woman was one of the stars of the Grand Slam-winning Irish team and in between training, the Sevens World Cup and everything else that goes with being one of the most successful women in Irish sport, Murphy and her team mates have been touring the country with the coveted silverware.

Just two weeks ago she was thrilled to bring the trophy back to her home county as she stopped off in Naas farmers’ market and the reception she, and her precious metal, received from local people was overwhelming.

“That was great. A lot of people I knew happened to be in the farmers’ market so it was brilliant to see directly how proud and happy people were, not just of what the team had done, but of what I had achieved too was lovely. People were absolutely fantastic and knew about it as well, telling me how they had watched the match on TV, it was really nice to hear,” said Murphy.

The trophy has to be returned next month ahead of the 2014 Six Nations which kicks off in February but before then, Murphy is hoping to bring it to schools in her hometown – although the demand for appearances has been so high that she will have to reserve time for the trophy to come to Kilcullen.

“When I was growing up you had female sports stars like Sonia O’Sullivan and she was amazing but I even knew when I was younger that running was not something that I wanted to do and I would never be very good at it and it’s nice to have women coming into schools who are good at rugby, Gaelic football or soccer so that it’s more relevant to the sport that you play and children can think that when I’m older maybe I can do what they do. Boys have that, they have role models on TV but girls maybe not so much so it’s nice to be able to fill that role a little bit,” said Murphy.

It’s been a whirlwind ride for the team since their triumph in a Roman mudbath last March. For Murphy and some of her team mates, no sooner were they off the Six Nations express they were straight back on the rugby sevens train. A first ever appearance in the IRB World Cup was the highlight of the summer and even though the team was severely afflicted by injury, they performed with distinction in their first ever World Cup, finishing second in their pool and reaching the semi-finals of the plate competition.

“It was a brilliant thing to experience and it is something that I’m very proud of. Sevens is definitely a sport that I’d recommend anyone to try out,” said Murphy, who returned to training in August and the All-Ireland League resumed last month. There has been little time to relax ahead of a huge year for the team as they take part in the Womens’ World Cup for the first time, which will be held in France next August but before then there is the small matter of their Six Nations’ title.

“It’s taken 20 years to win the trophy so I don’t know if it will be more difficult but I definitely think that we are now the team to beat so there will be an awful lot of pressure on us that way but at the end of the day, we are going to do exactly what we did in the Six Nations this year. We are going to take each game as it comes, just working on that one game and focusing on that and then moving step by step,” she said.

There is the added complication of the fixture list and the challenge of travelling to London and Paris to take on the behemoths of the northern hemisphere.

“France especially have phenomenal home support and it’s like walking into the lions’ den but I’m sure that they felt that this year when they walked into Ashbourne,” she says of the raucous home support she hopes will continue in 2014.

Not fearing the challenges presented is the hallmark of champions. Jenny Murphy and her team mates have been confronting bigger obstacles than England and France for years now so the challenge of holding on to that magnetic piece of silver is one they are ready to front up to and win.

By Aisling Crowe
Email Journalist
Contact Newsdesk: 045 432147
"
We are now the team to beat so there will be an awful lot of pressure"