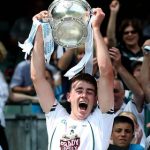 TEN years ago Two Mile House was just another rural GAA club struggling for numbers but in the last 12 months they’ve taken Kildare by storm.

In July Mark Sherry captained the county minors to the Lilies’ first Leinster title since 1991 and last Saturday, Sherry was one of four club minors to play in the Kildare junior football championship final – helping the House win a title has eluded them four times in the last seven years. The week before Sherry, Chris Healy, Adam Burke and Chris Julian were on the losing side in the minor A county final but the fact that the House were even in the final was a triumph in itself. They have been the ultimate underdog but through a combination of hard work and strategic planning, they are producing teams and players that are among the best in Kildare.

On Friday night they held their final juvenile coaching session of the year and each week, across Friday night and Saturday morning, they’ll have any number between 170 and 190 children playing football in the name of Two Mile House. They begin at under-6 and year after year, the majority of their young recruits graduate to the next age group.

“It’s a conveyer belt approach,” explains club chairman Des Healy, whose son, Chris, played with both the minors and the juniors this year. “10 years ago, I’d say we might have had 50 kids. Your under-10s would also be playing under-11 and under-12 and your three or four good lads would be playing under-13s as well.”

Numbers have always been tight in Two Mile House as you’d expect in a small club but their ambition was never restricted by their limited playing pool. Men like Tony McLoughlin and Johnny Brady had the vision to establish structured coaching for juveniles in the early ’90s.

“These guys (McLoughlin and Brady) were well ahead of their time but all they lacked was numbers,” says Healy. “No one was excluded whether a kid was good, bad or indifferent. Every team has to have two to three coaches and every coach has to be fully qualified. We don’t send three lads out with under-6s, they run around in a ring and that’s it. We all do the same drills, just with a different age group.”

The club’s approach is remarkable considering they have no tradition of success and their location on the outskirts of Naas meant they always had to compete against one of the biggest clubs in the county. Gradually they have grown to the point where this year they beat Naas in the semi-finals of the minor football championship.

“I was managing the minors this year but a huge amount of work has been done with those players since they were four,five years of age,” said Niall Browne, who captained the club juniors to the county title on Saturday. “It’s demographics more than anything else, a lot of people moved into the village in the mid to late 90s and the population went up and we had more of a pick.”

The Celtic Tiger may be long forgotten now but Two Mile House have reaped the benefits because they had the structures in place to attract new players into the club.

“We were lucky – when the Tiger was roaring, we got an influx into the village and we made sure we provided what those kids wanted and not let them off to other sports or back into Naas,” says club chairman Des Healy, whose mantra is simple: “We just try to keep improving.”

To that end the club have a juvenile co-ordinator who liaises with club coaches to ensure things are running smoothly. There is a coaches’ preparation meeting at the start of the season, where videos are analysed and training sessions handed out, while each year the club books a room in the Kilashee House Hotel to assess their performance.

Success is never guaranteed in sport – and the Two Mile House minors will attest to that having lost under-14 and under-16 championship finals on their way to this year’s county final defeat – but the success of Two Mile House is the number of children training in the club every Friday night. Silverware is almost immaterial when they have the guts of 200 juveniles playing football every week but with numbers like, trophies are almost inevitable.

By Brendan Coffey
Sports Editor
@coffeybrendan
Email Journalist
Contact Newsdesk: 045 432147
"
Every team has to have two to three coaches and every coach has to be fully qualified"