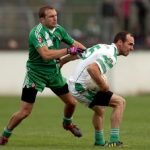 Players always say winning an all-star is secondary to winning a championship medal but the all-stars have become such an iconic institution in the GAA that they are almost as significant as Celtic Crosses.

If anything the all-stars should be expanded so as to recognise more players in the game, especially those local heroes who give their all for nothing more than a hiding against one of the big guns in the championship. One thing is for sure, there are enough good footballers out there to compile a team of alternative all-stars. Wouldn’t a game between the actual all-stars and the alternative all-stars make for a much greater spectacle than the international rules fare that is currently being served up? That to me would be a finer way for our finest Gaelic footballers to represent their country.

In the absence of any Kildare men in this year’s awards, I thought it would be worthwhile selecting an all-white version of the all-stars. Trying to take everything into consideration from the county minors to the junior club championship, it was more difficult than I thought it would be but here goes. We spend enough time criticising teams and players, and no doubt there will be plenty of critics of this selection, so it’s no harm to dish out some well-earned praise.

Keeping Tom Corley out of the Moorefield side is no mean feat and as the championship progressed, Kinsella became more and more assured between the posts. He was helped by an immense defensive display in front of him but he still had plenty of work to do and he did it with aplomb. With clean sheets to his name in both the senior final and semi-final, he can look back on this year with a lot of satisfaction.

Played a pivotal role for both the Kildare juniors in their run to the All-Ireland final and was one of many standout players for his club as they won the county intermediate title. A really tidy defender who is tight and tenacious, and most importantly, comfortable on the ball.

David Hyland makes defending look like something to be enjoyed rather than endured. He is a rare talent, strong enough to handle the biggest forwards yet fast enough to win any foot race. It is a pleasure to watch him play football and his displays for Kildare at under-21 and senior level this year were phenomenal for someone so young.

It seems like he has been around forever and this year he was better than ever. Composed at the back and never afraid to venture forward, even hitting the target a couple of times. A quiet, no-nonsense defender, O’Flynn is one of the unsung heroes for his club but he was immense this year in Moorefield’s march to the county title.

There’s always an air of anticipation when Tiernan gets the ball. It is not just his speed that makes him so effective, he is extremely skilful and well able to take a score as well. Without him, Sarsfields wouldn’t have come close to reaching the county final.

Another of Moorefield’s unsung heroes, Glavin’s return to form this year was one of the highlights of the senior championship. He is an imposing presence at the heart of the Moorefield defence but his intelligence is what sets him apart. A superb reader of the game, he uses the ball brilliantly and considering the injuries he’s had to overcome in recent seasons, it’s testament to his character that he came back so strong in 2013.

Without doubt the most improved club footballer in the county. Hardly put a foot wrong during Moorefield’s march to the senior championship, showing the kind of speed and stamina you normally associate with top level county players. His fitness is testament to his diligence off the field and you can see it in the way that he plays. Arrives on the pitch at the top of his game.

Is there a finer fielder of a football in Kildare? You could watch Hurley pluck balls from the air all day and nearly every midfielder that has come up against him this year has had no choice but to watch. Hurley has had his ups and downs with the county squad but he was the driving force for both the Kildare under-21s when they won Leinster and for Johnstownbridge when they won the Kildare intermediate championship. His free-taking and distribution are improving all the time so it’ll be a shame if he’s not around next year.

A force of nature in midfield, Flynn has been at the top of his game for a few seasons now and he was one of a few county players to emerge with credit after such a disappointing championship season. He does a huge amount of unseen work and it’s obvious how important he is because Kildare and Moorefield really miss him when he’s absent.

The standout player from this year’s Leinster-winning minor side, Healy looks like he’s ready to step into the senior setup already. His poise in possession really sets him apart while he looks to have the perfect blend of speed and strength. Can play in a variety of positions too.

Sweeney’s continued good form with his club is remarkable considering how long he’s been on the road now. Year after year he leads the line for Moorefield and again he was one of the best forwards in the senior championship this year. His on-field leadership makes him invaluable.

Anyone who got the chance to see Gately in action this year got a real treat. He is one of the finest freetakers I’ve seen in Kildare while his ability to mix it gives him an edge. Accurate off both feet, his scoring contributions in this year’s senior championship were phenomenal.

Showed some form with Kildare during the year and continued in that vein with Sarsfields in the senior championship. Deployed in a roving role with the Sash, Smith was almost back to his best this season. You would like to see him closer to goal but his ability to win ball and create chances from deep were really impressive in 2013.

A brilliant debut season from Brophy, which included that stunning goal against Dublin in the Leinster championship. Has graduated seamlessly from minor to senior and looks like he will be the man to lead the line for Kildare in the future. A brilliant ball-winner, he will only get better in years to come.

The most consistent forward in Kildare this year. He has gone from strength to strength with the county team and developed into one of our most stylish forwards with the ability to score with ease off either foot. Although it was a disappointing year for Carbury, O’Flaherty still came good when they needed him most in the relegation play offs.