County board in firing line ahead of Club Kildare EGM 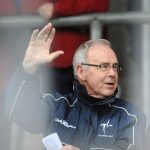 CLUB Kildare members are bracing themselves for a stormy meeting tonight (10 December).

The county’s GAA fundraising body will air their grievances with the county board at a specially convened EGM in Hotel Keadeen. Among the items down for discussion will be the future of the fundraising arm of Kildare GAA.

Club Kildare was established as a sub-committee of the county board last year but chairman Pat Mangan is unhappy at how that has worked out.

“This time last year we signed up as a sub-committee of the county board and after a number of meetings we were promised all kinds of support and co-operation from the county board,” said Mangan.

“It’s 12 months down the line now and we’re not entirely happy with the way it has worked out and we feel it is time to give our members an opportunity to get up to speed with the way things have panned out over the last 12 months, that’s what we intend to do at the meeting, outline how things have gone and how that relationship has worked,” he said.

Although the future of Club Kildare is very much up in the air at the moment, tonight’s meeting will not signal the end.

“Club Kildare will not be wound up at the meeting. It will be just a chance to report on what has gone on and it will give a chance for members to ask questions and to get clarification on various different things. I’m hoping the county board will be there because our treasurer is Martin Whyte so he attends Club Kildare meetings. I am hoping he will be there along with chairman John McMahon. One way or another no vote or decision will be made (on the future of Club Kildare), we’ll have our AGM in January and a decision will be made then on the future of Club Kildare.”

Mangan, who says Club Kildare have raised an estimated €1.4m during his ten-year stint as chairman, was deeply unhappy with the way in which the removal of Kieran McGeeney as senior football manager was dealt with but that is far from the only issue that the club has with the county board.

“Obviously I wasn’t happy with the handling on that night, we weren’t allowed a vote. That wasn’t the straw that broke the camel’s back though. I’m just disillusioned at the way in which the relationship has gone over the last 12 months. They have certainly not been fully supportive or co-operative with Club Kildare. It gets very, very frustrating when dealing with that,” he said.

It all shapes up for what could be a very fiery meeting and all Club Kildare members are invited to attend proceeding that kick off at 7.30pm in the Keadeen.