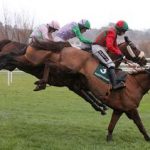 Trainer Shark Hanlon has lost out in his bid to have Hidden Cyclone claimed winner of the Paddy Power Dial-A-Bet Chase at Leopardstown.

Hanlon’s charge, who finished second to Benefficient in the Grade One contest on 27 December, was beaten by three-quarters of a length although Tony Martin’s charge who got close to Hidden Cyclone on the run-in. A stewards’ inquiry immediately after the race failed to alter the result but Hanlon lodged an appeal to the Turf Club.

“We had to give it (an appeal) a go. There was interference, there was a lot of money involved and it was a Grade One race. I still believe if the two horses had run straight to the line it would have been a different result, but there is no point going on about it now,” said Hanlon, a columnist with the Nationalist.

Hanlon will now send his stable star to Ascot for the Sodexo Clarence House Chase, formerly known as the Victor Chandler, on 18 January.

Enable entered for Juddmonte Pretty Polly Stakes at The Curragh