Ryan happy to start a winning habit any time 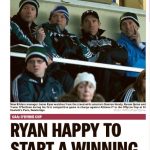 ONE down, four to go.

Retaining the O’Byrne Cup isn’t Jason Ryan’s biggest priority but winning games is a habit he’s happy to develop at any time. On the evidence of Sunday’s victory against Athlone IT in the first round, it was hard to draw any conclusions but the Lilies look good enough to contend for the pre-season title again.

“Our aim is two win two more games and we’ve another competitive game the following Sunday so it’s important to go into those two games as training but at the same time, you want to win them because you want to have that semi-final place. But I’m sure Longford do as well so we’ll see what happens,” said Ryan after his first competitive victory as Kildare manager.

Winning by 4-24 to 0-12 didn’t give Ryan much scope for assessment but there was one, undeniable positive from the game.

“No injuries,” he said, with a smile. “We were down 18 players today so we’re just delighted. It’s a big trial for us. We played Tipperary this morning with another team, so we’ve a lot of players we’re trying to get a look at. Whether you win by a lot, it’s just guys getting balls in their hands. You can play as many friendlies and as many games amongst yourselves as you want but playing a competitive game at whatever stage of a season is great.”

Still armed with a substantial squad of 55, Ryan used 21 players against Athlone and another 19 against Tipperary in a challenge game on Sunday morning. The bulk of his starting 15 for the opening round of the National League against Mayo will come from the 21 used in the O’Byrne Cup but with experienced players like Ollie Lyons and Daryl Flynn in action against Tipp, there is plenty of competition to make the starting 15 for 2 February.

“I think the group we had today with some of the fellas that played this morning, that’s going to be the team that will be starting the National League,” said, who had well-known Meath referee, Cormac Reilly, on duty for the Tipp game to help with his side’s transition to the new black card system.

“We played Wexford before Christmas in a friendly and got Eddie Kinsella to referee it. We felt these were referees (Reilly and Kinsella) that have been very high profile and should be very familiar with what the black card is being used for and not being used for. The likelihood is that the Division 1 matches and championship matches we’re going to be playing, they’ll be the guys that are going to be involved. So we want to make sure we understand the rules according to them,” said Ryan although Athy’s Brian Kinahan has also helped with the education process.

“I’d say the players learned from Brian Kinahan. He lasted four or five minutes in the freezing cold against Wexford in Tinryland. So I’d say he’s the one would have educated them all as to you don’t want to be sitting on your ass for most of a game.”

Ryan’s charges return to action tomorrow night (Wednesday) against Longford when they meet in Newtowncashel at 7.45pm while it’s back to St Conleth’s Park on Sunday for the final group game against Carlow at 2pm.