Bolton busy looking over his shoulder 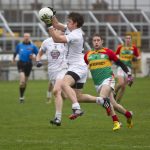 YOU might assume that, even with an influx of new players, an experienced campaigner like Emmet Bolton would be assured of his place on the Kildare panel but the Eadestown man is already looking over his shoulder.

“You can’t rest on your laurels if you’re coming back from injury or whatever the case may be, you have a lad nipping at your heels,” said Bolton after his second outing of the season against Carlow in Sunday’s O’Byrne Cup clash. The Eadestown man got married at the end of last season and with changes in the Kildare management team as well, Bolton enters a new phase of his career.

“The main thing was that we were a certain level with Kieran McGeeney and we wanted to keep it at that level. I think the obvious choice was Jason (Ryan) and I think he has brought a massive level of professionalism to it. He has a fantastic backrooom team with him and it’s really, really goood at the minute. It’s always good to have a fresh face and a fresh voice and he has us ticking over nicely at the minute. His ideas are fantastic, his tactics are fantastic and we are looking forward to the year ahead,” said Bolton. The talismanic defender has also had to adapt to a new training regime with the county.

“Julie (Davis) had a fantastic base done over the years with us. Barry has come in and focussed a lot on speed and the strength aspect of it as well. Whatever new management team comes in they are going to bring a new backroom team with them. It’s all fresh, it’s all different, everybody will have different ideas and they vary to what has gone before,” he said.

Kildare will now face UCD in the O’Byrne Cup semi-final next Sunday at St Conleth’s Park but Bolton knows the defending champions have is plenty to work on.

“We were poor enough now,” he said of Sunday’s display. “In the first half we had up in the high 20s in terms of numbers of turnovers which at any level is fairly poor and we’d be fairly disappointed with that. I thought at times we moved it out well. We tended to move the ball laterally across the middle third. They had a sweeper back and we probably kicked it down the neck of the sweeper which is criminal at this level. It doesn’t help you in conditions like this. Playing against a wind like that in the first half you need to keep it simple and execute your gameplan, do the basics well. At times we did that but not enough.

“In the second half the wind probably made it a small bit easier for us. Rob (Kelly) is a fantastic target man in there for us. He has good hands and is well able to turn and take a score or lay it off to lads. He is in the Tomás O’Connor mould. It was a bit better, we cut down on the mistakes.”

A win for Kildare on Sunday will give them the chance to win the O’Byrne Cup on home soil the following week against either Meath or DCU.