Kelly gets the chop as Ryan wields axe 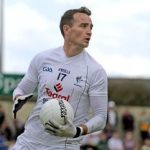 KILDARE senior football manager Jason Ryan has cut 14 players from his panel ahead of the National League campaign.

Rob Kelly – who was a regular presence in the championship side during Kieran McGeeney’s reign – is the biggest casualty of Ryan’s first cull. The Straffan man featured at full-forward in the O’Byrne Cup campaign but Ryan has opted to go without him for the league. The senior panel has been trimmed down from 58 to 36 although eight players are on the injury list  – Alan Smith, John Doyle, Eamonn Callaghan, Peter Kelly, Niall Kelly, Jonathan Byrne, Eoin Doyle and Brian Flanagan.

Apart from Kelly the other players who failed to make the cut are: Mick Konstantin, Daryl O’Brien, Joe Kinahan, Brian Kinahan, Paul Kelly, Conor Murphy, Danny O’Keefe, Hugh Mahon, Shane McCormack, Eoin Naughton, Barry Noone, Ray Cahill and Tommy O’Neill. There are nine newcomers on the panel – Conor Tiernan, Conor Canning, Adam Tyrrell, Robbie Dunne, Sean Campbell, Darroch Mulhall, James Gately, Kevin Murnaghan and Seamus Hanafin. St Laurence’s Padraig O’Neill, who missed the O’Byrne Cup campaign as he was away on honeymoon, will be back for the start of the league.

County champions Moorefield now have four players on the panel with the addition of Adam Tyrrell and Kevin Murnaghan while Celbridge have the most representatives of any club with five.

Kildare continue their bid for back-to-back O’Byrne Cup titles when they face UCD in Sunday’s semi-final at Newbridge.