FOGARTY TAKES IT ALL IN HIS STRIDE 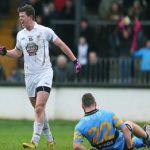 Padraig Fogarty celebrates scoring one of his four goals against UCD

MOST forwards can only dream of scoring of 4-3 but Padraig Fogarty was keeping his feet planted firmly on the ground after managing that haul against UCD.

“It’s nice to be in the right position a few times but it’s early in the year. It’s the O’Byrne Cup so I wouldn’t be reading too much into it but it’s nice to be getting the games and trying to down a marker,” he said.

Fogarty was well within his rights to not get carried away. After all, this was a young man who seemed to have the GAA world at his feet when he climbed off the bench at Croke Park in April 2012 to inspire Kildare to victory against Tyrone in the Division 2 league final. For whatever reason, that failed to kickstart his senior career and he didn’t start a game until this year’s O’Byrne Cup. 2-2 in his opening two games gave him confidence and he carried that into Sunday’s game and a point within the opening 30 seconds was the ideal start.

“As a forward you want to get on the scoreboard as early as you can to settle yourself. There was space there and there was quality ball coming in one after an other so I suppose you’d be wanting to get one or two,” he said modestly.

Fogarty has played underage football with the likes of Paddy Brophy, Darroch Mulhall, Sean Hurley and Paul Cribbin and the understanding in the forward line helped create some stunning scores.

“Everybody is working well together and I suppose today it definitley worked. We kept the shape well, the lads were moving well. It was better conditions today for football than in the last few days, things just fell into place. It was a good score built up by the end, as forwards that is what you want to be doing,” said Fogarty.

The 21-year-old St Laurence’s man is feeling fit at the moment and that is helping his game.

“I’ve been training well. There are great lads there to get us fit. At this time of year it’s about working hard and getting the fitness into the legs. Everybody is working hard at the moment and we just have to keep that going and bring it into the league,” he said.

It wasn’t all one-way traffic though and UCD proved to be a difficult opponent before Kildare got on top in the second half.

“We expected that, they have some good players there. At half-time the game was right in the melting pot. We got a few scores and pulled away in the second half but they are a good side and will go well in the Sigerson. It was a good test ahead of the league.”

Kildare will now face a home game against Meath in their fourth succesive O’Byrne Cup final.

“As a footballer you want to be playing games. It’s another game for us to look forward to and it will only benefit us going into the league, you can’t beat match fitness so it will be nice to get another game under the belt and hopefully get the win. It would be nice to win a trophy at this stage of the year,” said Fogarty.

By Ger McNally
Email Journalist
Contact Newsdesk: 045 432147
"
At this time of year it’s about working hard and getting the fitness into the legs"