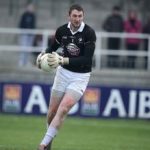 KILDARE senior football manager Jason Ryan has made one change to his team for Sunday’s O’Byrne Cup final against Meath.

Maynooth’s Mark Donnellan replaces St Laurence’s Shane Connolly between the posts while the outfield selection remains the same. St Laurence’s Padraig Fogarty was the star of the show during last Sunday’s 5-17 to 2-11 victory against UCD, finishing the game with a whopping 4-3 and he continues in the full-forward line alongside Paddy Brophy and Darroch Mulhall, who has impressed since coming into the panel for the first time this season.

The Lilies are the reigning O’Byrne Cup champions and having won last year’s title in Parnell Park against Dublin, they will be eager to win the pre-season crown on home soil in Newbridge this weekend.

The Town End Terrace will not not be available to patrons this Sunday due to ongoing upgrade works.  These works will be completed for the Allianz League matches in St Conleth’s Park. The capacity of the covered stand is 2,500 and all other patrons will be catered for on the Barracks and Kilcullen End Terraces.

Turnstiles will open at 1pm. General admission to the game will be €10.  Pensioners and students €5 and U16s free.