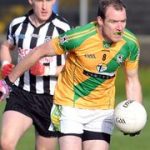 HIS club is gripped with All-Ireland fever but Two Mile House veteran Derren Casey remembers a time when the ambition within the club was to win one game.

“I remember one year we hadn’t won a championship game for three or four years and the aim was to win a championship game, never mind get to a final or top our group. I’ve been on the panel since I was 16, since 95 or 96 maybe. We didn’t win anything until we won Division 3 in 2008 and then this year when you are nearly on your last legs you win everything, it’s great,” said the 34-year-old.

Casey can laugh now but there were some dark days, particularly last gasp county final defeats to Straffan in 2009 and Clogherinkoe in 2012.

“You think to yourself, ‘Feck, did I do something on somebody’. Donal Browne said to me after Clogherinkoe beat us in 2012 ‘Are we going to watch everybody else win it?’. I knew there was serious talent coming through because I had been involved in the underage, I knew how good they were, it was just a matter of us keeping ourselves motivated while those young players came through,”

Casey managed the likes of Chris Healy, Mark Sherry, Adam Burke and Chris Julian for two years at under-16 level and a year at minor.

“There is just something about that group, they won Feile at under-14, Eddie Julian had them back then. They are the best underage club team that I ever saw. For Two Mile House at under-14, under-16 and minor to be not only competing with Naas and Maynooth and Sarsfields and the like but to be beating them guys is unheard of. I remember two or three years ago they beat Clane and it was massive for Two Mile House to be beating Clane.”

The fact that a lot of these young players operate in the forward line has been an even bigger bonus.

“For years we basically had one forward, Aidan Casey. Aidan is still only 25 or 26 but he was in the forward line on his own for years. Now we could start six minor or under-21 players in the forward line in an All-Ireland final and we’d have no problem with it. It took the pressure off Aidan. They went straight into the team and it makes the job of everybody on the team that much easier because we just win back the ball, give it to them and they do the damage,” says Casey.

Even with those players coming through, Two Mile House needed a man to harness their talents and Jarlath Gilroy has been the perfect manager for the club.

“My dad was chairman at the time when the club was looking for a manager and I had a bit of inside info that he was interviewing Jarlath and I couldn’t believe that somebody like him could be getting involved with our team. I had seen what he did with Ballymore and he was with Kildare underage teams. His name came forward and I was thinking this is nice. He’s a winner and we had the underage players coming through at the same time.

“We won the county final on the Saturday and Jarlath told us to enjoy the night and the day after but that we’d be back training on Tuesday. We all thought he was crazy but we were down in the field that Tuesday, and we didn’t see much ball either. We were running around and I think it was Donal Browne beside me and we were like: ‘What are we doing up here, we should be still out celebrating’. In fairness to Jarlath, he did get us up for Leinster. We thought that was it after winning the county final but once we beat Drumbarragh in the first game, we said on the bus afterwards that we would give Leinster a right crack. It was basically Jarlath that pushed us for that, we would have been happy with the county title but we kept going. If he wasn’t involved we wouldn’t be in an All-Ireland final, definitely not.”

All the elements of a good manager, talented young players and relationships between team mates culminated in one perfect moment in the Leinster final against Hunterstown Rovers. With 15 minutes left, the game was on a knife edge. Aidan Casey lined up for a shot and Derren was alert to every possibility.

“I’ve coached Aidan underage and have known him since he was ten years of age so I know he him very well. When he lined up to shoot I knew that it was either going to over the bar or wide on that side. I just took a chance, it was going wide but I was able to get my hand to it. It could have landed with anybody but luck was on our side that day and it landed with Chris Healy and you know where he is going to put it, in the back of the net. It was a combination of luck and being around the lads so long, you know where a kick is going to go. It was funny because I actually thought that it was either going to go wide or over and that was the only reason that I was there.”

That goal was a pivotal moment in the game and led to an All-Ireland semi-final against Emyvale of Monaghan where that wonderful injury-time point from Casey’s midfield partner Niall Browne settled the game.

“Niall was just a man possessed during that game. When he had that last ball I knew he would score because he had hit four already. On another day he might have dropped that short but he would have done the same three or four times already in the game. I knew that he was going to score. I thought it was a draw game at that stage and my first thoughts when he scored were how am I going to last another 20 minutes but then the final whistle blew and we won and it was amazing,” he said.

His father, Paddy, and his wife Carol, whose brother Ben Merrins is also part of the squad, are completely engrained in the club and that means those special moments along the way to Croke Park have held even greater significance for the Casey family.

“I saw my wife jumping the fence with the two kids hanging out of her in Pearse Park. I saw my Dad, it was just crazy. I was wrecked after, it was emotionally draining but it was a great feeling,” he said.

He hopes to enjoy a similar feeling on Sunday. The day after, he flies to New Zealand ahead of his brother’s wedding the following weekend. It would cap an amazing 12 months if he could make that trip as an All-Ireland winner.