A club united in football devotion 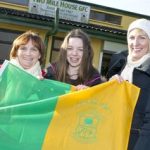 IF the size of an achievement by a GAA club is measured by the knock-on effect within their local community then Two Mile House have been paid the ultimate compliment.

This weekend, Sunday mass at St Peter’s Parish Church will be celebrated one hour earlier so that the squad can attend before departing for Croke Park to play in the all-Ireland club final.

“It’s unique to change the time of the mass, I don’t remember it happening before,” says parish priest Fr Paul Dempsey, a keen supporter of the club.

“At the end of the brilliant match against Emyvale Jarlath Gilroy happened to mention to me that we’ll have to do something on the morning of the match. Between us we decided to move back the time of the mass from 11am to 10am so that the squad and all the rest can attend mass. Please God they’ll be getting on the bus then and heading by Garda escort to the match at Croke Park. I’m sure there will be a good crowd at the mass too before people leave for Croke Park.”

The earlier visit to mass will suit the team and supporters although Fr Paul wouldn’t miss the match for the world.

“I’ve been at the matches all the way along, they’ve been absolute thrillers, really mighty. They dug deep the last day against Emyvale so please God they’ll come up trumps next Sunday,” he said. “The GAA is just such a big part of the community and this has brought people together, there is great bonding within the community. Everybody is talking about it, the whole thing of being in the school, the kids are excited, the flags are up. There is a great pride in the team. It’s put the place on the map. They have brought a great buzz to the place.”

Back at the club, excitement was building last Sunday as supporters gathered to purchase all manner of items to show their support ahead of the big game.

“I’ve been to Croke Park a lot,” said Billy Fogarty. “Either for Kildare football or Tipperary hurling but I have to pinch myself to think that I am going there to support Two Mile House.”

Others like Eddie Julian and Des Healy chatted about how far they have come in a short space of time. Both men have poured their heart into the club and played a significant role in developing the young players that are now the backbone of the team. Their sons, both named Chris, will start in the forward line on Sunday. They are a great example of the youthful exuberance in the team and that feeling has spread from the pitch into every corner of the community, filling the chest of every man, woman and child with pride as Two Mile House prepare to visit the home of the GAA.