You could say that he’s a dreamer 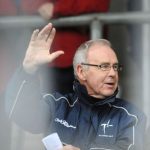 HE has a dream.

He has a dream that one day his county will rise up and live out the true meaning of his belief: “Kildare can win an All-Ireland.”
He has a dream that one day former Lilywhites and the sons of former Lilywhites will be able to sit down together at Sam Maguire’s table.
He has a dream that one day the players of his county will play in a competition where they will not be judged by the colour of their jerseys but by the content of their success.
He has a dream today. And everyday. Since he was a boy playing football for his county, Pat Mangan has dreamed about Kildare winning an All-Ireland.
****
If Pat Mangan had his way, he wouldn’t be here. He wouldn’t spend his days chasing people for money or convincing anyone who’ll listen that his county is good enough to win the ultimate prize in Gaelic football. He’d much rather chase a little white ball around the golf course that sits behind his left shoulder. But as much as he loves his golf, it can’t match his passion for football.
“I would give anything to see Kildare win an All-Ireland.”
The dream started when he made an under-14 Kildare football team in the 1950s. In his head he was already plotting the journey down the road: the minors in four years and from there to the seniors. At 19 years of age he was further along than he ever could have imagined. The introduction of the under-21 championship couldn’t have come at a better time for Mangan and Kildare. He was midfield on the county team that won the first ever All-Ireland at that grade but between then and his retirement in 1979, his pursuit of the dream never got beyond Leinster.
“Your ambition is to play club, then county and then the All-Ireland; I dreamed that dream and I thought I was getting close to it at one stage and it was a huge disappointment to me not to have even won a Leinster.”
Goodness knows the Kildare teams of that era came close to winning a provincial championship but the class of ’65 never repeated their success at senior level. And yet for all their failures, much worse was to come in the 1980s. By the end of the decade, Kildare football had reached a nadir. Losing an O’Byrne Cup game to Kilkenny was the low point but you had plenty to pick from.
“We were at an all-time low,” says Mangan, almost wincing at the thought. “It was very depressing for everyone.”
Though the county couldn’t see it, and the rest of the country wouldn’t have believed it, there was a new dawn about to rise. Through the fog of Kevin Heffernan’s cigarette smoke, Kildare were about to glimpse a bright new future.
The former Dublin manager would advise them but he refused to guide them. He made that clear when Mangan called to see if he would come to meet a group of ambitious Kildare men. In time they would become the driving force of the county’s supporters’ club but they didn’t know that then. All they did was attend a meeting at a stud farm.
Michael Osborne called the meeting at Kildangan stud. His work for Sheikh Mohammed meant that he often travelled to Woodpark Stud in Co Meath as well. Although Kildare fans mightn’t have enjoyed watching Meath win all around them while the Lilies languished, it was to prove an inspiration for Osborne.
When he witnessed the flags and the bunting and the colour across the Meath border, he wondered if it couldn’t happen in his own county.
“He brought a lot of people who were interested in the welfare of Kildare football, business people really,” says Mangan. “Out of that, the supporters’ club started and a committee was formed.”
A manager was the first item on the agenda and two names were considered: Heffernan and his Kerry nemesis, Mick O’Dwyer.
It was Heffernan who got the call first but he wasn’t of a mind to take on the job. Instead he did something far more valuable.
“He was incredible to listen to,” says Mangan, “to talk how bad things were in Dublin and how low they were when he came in. He decided to set about changing everything. He put together the panel, some of them weren’t that talented but they were big, strong, intelligent guys that would listen and do what they were told to do. And they were committed.”
For a county at such a low ebb it was unsurprising that they failed to land their first catch but no one could have imagined who would be on the end of their next cast. Mick O’Dwyer would lead Kildare back into the light.

By Brendan Coffey
Sports Editor
@coffeybrendan
Email Journalist
Contact Newsdesk: 045 432147
"
I would give anything to see Kildare win an All-Ireland"