HOLY DAY FOR THE HOUSE 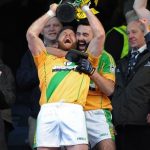 With a little help from God, Two Mile House completed their football fairytale at Croke Park on Sunday. Having risen from the bottom of Kildare club football to win a county championship last October, the House were crowned All-Ireland champions on the GAA’s greatest stage.

Forever more the 9 February will be holy in Two Mile House.

“There’s a mixture of nervousness, tension and stomach churning – and that’s just the priest,” local curate Fr Paul Dempsey told an anxious congregation at Sunday morning mass. The team, dressed in their club tracksuits, received a standing ovation as they arrived to take their seats at the front of the modest church, which until Sunday was the major landmark for the county’s biggest, small village.

After mass had ended, the players followed Fr Dempsey down the centre-aisle. Another standing ovation ushered them through the chapel but the silence had already been shattered by a deafening roar: ‘C’MON THE HOUSE.’

A Garda escort took them through red lights en route to Croke Park and a five-goal display in the final took them up the steps of the Cusack Stand where captain, Niall Browne, collected the All-Ireland trophy.

“Lads don’t actually realise what they have done,” said manager Jarlath Gilroy, who masterminded the success of his adopted club. “The 29 players on that match programme will be forever remembered in the history of Kildare GAA.”